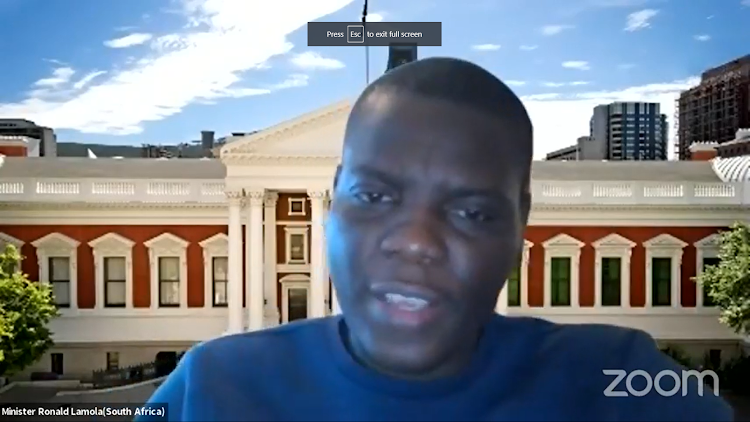 INCLUSIVITY NEEDED: Speaking on Thursday, ANC NEC member and justice minister Ronald Lamola says a united society will only be achieved when all people, including minority groups in SA, participate freely in the economy
Image: SCREENSHOT

Coloured people, especially those who have been ANC supporters, are upset  about what appears to be the “Africanisation” of the party.

This is according to Nelson Mandela Bay ANC regional task team leader Nceba Faku, who was speaking during a webinar hosted by the task team on Thursday night.

Faku said discussions about minorities and how they felt about the ANC were of serious concern.

“Those communities constitute about 25% of the voting population and of that, historically, the majority have been supporters of the ANC,” Faku said.

He said that at the dawn of democracy, about 15 wards in the northern areas had been ANC strongholds, with that number now standing at 0.

Faku said the issue was of concern beyond Nelson Mandela Bay and the province, as throughout SA minority groups formed a significant portion of the population and could make up voting numbers for the ANC.

“But we do this beyond seeking numbers for votes,” Faku said.

He said job losses, economic hardship and poverty caused by Covid-19 had become more widespread across all races.

“It is now a practical experience that poverty has come home and everyone seeks government intervention.”

The subject was a sensitive topic that the ANC needed to respond to appropriately  to uplift minority communities.

The economic marginalisation of Africans was a barrier to achieving a united democratic society.

He said it was in the interest of all to achieve inclusivity in the economy, so that all Africans could benefit, irrespective of colour.

“In a democratic nation, it is important that we have everyone participating fairly and freely in the economy and even having access to international markets.

“We must achieve this and have all South Africans participating in the economy.”

Speaking about corruption, Lamola said it was not only a threat to democracy but also undermined the government’s moral authority to transform an otherwise racialised economy.

He said it also undermined the ability to address the question of minorities who were still victims.

“Townships are painful reminders of the past in terms of infrastructure development and this is the same challenge that is upon the coloured communities.

“Can we really be a united society without resolving those challenges faced by those communities?”

He said the nation would be truly united in diversity if there was universal access to health care and equitable access to land and education.

Parties have led South Africa to its current crisis.
Opinion
1 year ago

The new cabinet has received a vote of no confidence even before it even starts performing its duties.
News
2 years ago
Next Article