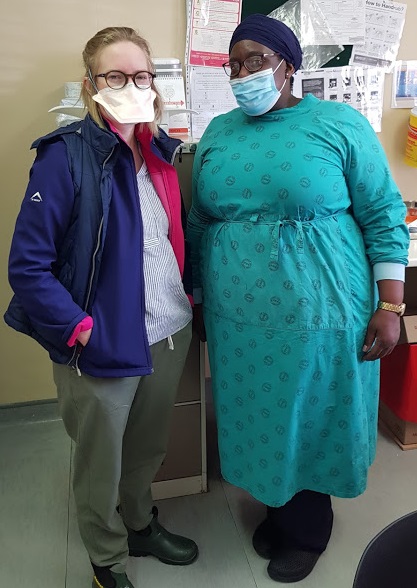 Dr Caroline Nilsson and registered nurse Rhulani Baloyi, who both beat Covid-19, have been nominated by the Western Cape government as rural heroes.
Image: Supplied

When Rhulani Baloyi, a registered nurse at Klapmuts Clinic in the Cape winelands, fell ill in June and ended up being hospitalised for a week, there was no-one to look after her 15-year-old daughter.

But the distraught teenager didn’t have to look very far for care and reassurance. Her mother’s colleague Dr Caroline Nilsson immediately assumed the role of mother to her, thanks to Baloyi’s kindness and the spirit of giving which motivated the doctor to give back to her.

The two front-line workers and women not only beat Covid-19, but their inspiring camaraderie has resulted in them being nominated by the Western Cape government as rural heroes.

Not only did Nilsson take Baloyi’s daughter into her home after the sudden hospitalisation of her mother, but she also took her for Covid-19 testing at her own expense and kept their family in Gauteng informed.

The young girl’s quarantine period ended when her test results came back negative. “She [lent] my daughter her laptop and gave her access to Wi-Fi. She even went as far as getting her lipgloss, as my daughter had forgotten hers at home. She cared for her just like a mom,” Baloyi said this week.

Affectionately known as “Rhully” or “Sr B”, when Baloyi fell ill doctors initially thought it had to do with her heart. When she was eventually tested for Covid-19 and the results were positive, her condition worsened.

She was briefly hospitalised in Worcester and upon discharge Nilsson braved a storm  to bring her home. Knowing that Baloyi and her daughter lived alone, Nilsson took the girl’s number in case of an emergency. When Baloyi was hospitalised again just two days later, her daughter immediately called her mom’s colleague.

“Caroline is naturally a caring and loving person. She never thought twice about assuming the role of a guardian to a teen girl whose mom was at the brink of death,” said Baloyi.

As someone with hypertension she was at greater risk of getting severely ill from the respiratory disease.

Understanding that her colleague was in a difficult situation, Nilsson said there was no question about what had to be done. “Rhully’s daughter needed to be in quarantine until she received her test result. We had a spare room. There was only one right thing to do. The decision was made easier by Sr Baloyi being a wonderful person and an exceptionally caring and hardworking sister.

“This was my chance to return her kindness and giving spirit,” said the doctor who enjoyed spending time with the teen and learning about her dreams for the future.

Being reunited with her daughter after eight days in hospital was a joyous and emotional occasion for Baloyi.

“I appreciate the gift of life. I can write a book about Dr Caroline’s kindness and what it means to me. Myself, my daughter and family will forever be grateful to her and her family. Kindness like hers can never be repaid, but paid forward.”

Nilsson, who also recovered after contracting Covid-19 earlier, called for health professionals to “stick together” during the pandemic and support each other.

“One of the best ways you can support a colleague is to simply ask how you can assist and to take it from there. It could be simple things like bringing food for someone in isolation, or checking in to see that they are coping. It is a question about asking what they need,” said Nilsson.

Mangosuthu Buthelezi beats Covid-19, a week before he turns 92

IFP founder Mangosuthu Buthelezi is free of Covid-19, just in time for his 92nd birthday, his family announced on Thursday.
News
1 year ago

Excess deaths will soon be a thing of the past: Medical Research Council

After watching the number of excess deaths decline for the fourth successive week, SA Medical Research Council (SAMRC) experts said on Wednesday that ...
News
1 year ago

Wayde van Niekerk's latest test for Covid-19 has come back negative‚ but he will be unable to compete in Italy on Saturday night.
Sport
2 years ago
Next Article