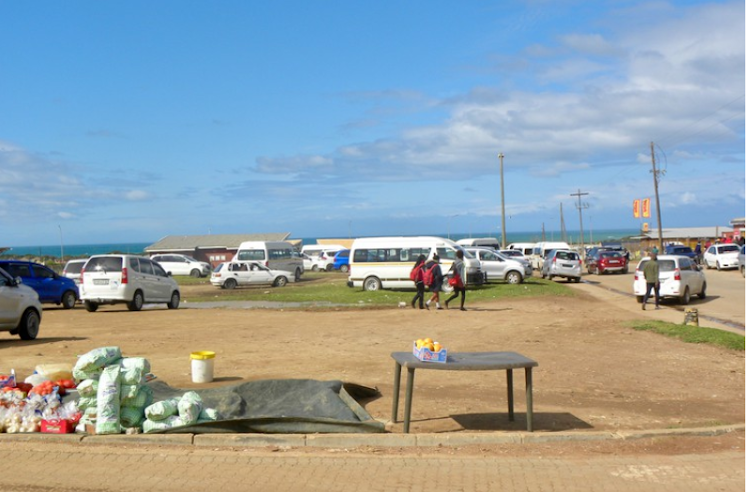 Taxis have been parked since Monday at the Tokyo Sexwale taxi rank in Jeffreys Bay.
Image: Joseph Chirume

Rivalry between Border Alliance Taxi Association and Uncedo Taxi Association over operating routes in Kouga and Koukamma regions became violent after a taxi operator was found with an unlicensed gun and arrested by police.

The man “was seen hiding a firearm underneath a vehicle” said police spokesperson Sgt Majola Nkohli. He said about 50 taxi operators then converged on the Jeffreys Bay police station, demanding his release. The taxis blocked a street and damaged windows before they were dispersed with stun grenades.

Jeffreys Bay resident Mildred Mhlope said: “This taxi violence is affecting commuters because we cannot travel at will. My mother is in hospital in Port Elizabeth but I have not been able to visit her for the past three days.”

Chairperson of the Humansdorp Taxi Association (an affiliate of Border) Thembalakhe Tshabane accused Uncedo of poaching passengers. “We do not want these taxis on our roads because they are not registered. They claim they belong to Uncedo taxis and want to do business in our area. They even failed to produce documents to prove that they are registered to ferry passengers here.

Transport minister Fikile Mbalula wants the formation of a single new taxi industry body that will replace the current associations that are split ...
News
1 year ago

“We decided to withdraw all our taxis from the roads so that the public will see the situation. They should know that our business is being destroyed by illegal taxis. We have been operating these routes for many years and we have earned the trust of our passengers.”

A member of Uncedo, based at Njoli Square in Zwide, Port Elizabeth, said: “The Humansdorp Taxi Association is jealous of us. Those drivers and operators who are being beaten and threatened with guns are members of our organisation. We had meetings a couple of years ago with the late mayor, Elza van Linden, and the department of transport, who allowed us to operate in that region. I don’t know where all this violence is coming from.”

Spokesperson for the Eastern Cape department of transport Unathi Binqose said the route belongs to the Humansdorp Taxi Association, “the only registered association there”.

“The department had moved to address the challenges there, however, those had to be put on ice due to the Covid-19 pandemic. But now that we are on level 2, we are due to meet with the bosses of the warring factions to find a lasting solution to the problems.

“Taxi violence is completely unacceptable. Not only does it impact on the economy, as a lot of our people depend on taxis to get to work, it also leads to a lot of senseless death among operators and in some instances innocent commuters as well,” he said.

Minister of transport Fikile Mbalula has set aside October 29 to 30 for a national taxi lekgotla.

New police unit to be established to tackle taxi violence

An investigator for the commission of inquiry into taxi violence says a new police unit which will be resourced and budgeted for will be established ...
News
1 year ago

A former top cop is expected to lift the lid on taxi violence that has plagued Gauteng between 2012 and 2020.
News
1 year ago

Big Zulu uses bars and rhyme to kill the game

Self-proclaimed king of inkabi rap Big Zulu is dispelling the myth that he is a violent, hostile and angry man.
Entertainment
1 year ago
Next Article