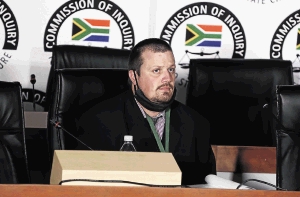 The state capture inquiry has heard evidence by a private contractor who did electrical work five years ago at the home of former environmental affairs minister Nomvula Mokonyane in Krugersdorp.

Agrizzi testified that while he was at Bosasa, a number of people were given monthly payments by Bosasa - and named Mokonyane as one of them.

Agrizzi and another former Bosasa employee, Richard le Roux, testified that Bosasa installed CCTV cameras and other security equipment at the homes of certain people, including Mokonyane.

Commission chair deputy chief justice Raymond Zondo said the commission had asked Mokonyane to depose an affidavit in response to the allegations.

"She co-operated and gave an affidavit giving her side of the story. My recollection is she denied that Bosasa had paid her any money as alleged by Mr Agrizzi," said Zondo.

"She said Mr Agrizzi had never been to her house. The commission continued to make investigations arising out of Ms Mokonyane's denial."

Evidence leader Viwe Notshe SC said the commission and Mokonyane's legal representatives met, by agreement, at her home on Sunday.

"The purpose was to confirm features that were identified by and mentioned by Mr Le Roux in his statement that he saw when he went to do some repairs at Ms Mokonyane's house.

"To see whether they are there. And at the end of the inspection, we then sat down and recorded what we had seen and pointed out by Mr Charl le Roux," Notshe said.

Among the features Le Roux had identified was a guard house to the left of the gate and an Aston Martin vehicle in one of the garages.

Le Roux was employed by Renier van Biljon, a qualified electrician whose company did work for Bosasa in 2014 and 2015. In a statement read out yesterday by Notshe, Van Biljon, who now lives in New Zealand, mentioned some of the jobs done at Mokonyane's household.

They included replacing a distribution board for the swimming pool, repairs to the electric fence, a call out to repair the air-conditioning system and a repair to the backup power generator system.

In his testimony yesterday, Le Roux said he worked under Van Biljon and listed a number of jobs he did at the house such as replacing lights, fixing a water feature and repairing the backup power system installed by Van Biljon's team.

"When I worked there, I noticed there was an expensive car there. An Aston Martin. The car was in the middle garage. It was covered with a special car cover," he said.

In his statement to the commission, Le Roux had said the car was black or dark blue. However, the car the teams saw on Sunday was white.

Notshe said there was an e-Natis registration, which would give clarity on the colour of the vehicle. "With your leave, can I deal with that issue later," Notshe asked Zondo.

Senior ANC MP Cedric Frolick was also due to give evidence but this was postponed due to ill health.

Agrizzi had accused Frolick of allegedly being used by Bosasa, at a R40,000 monthly premium, to facilitate meetings between the company and various politicians.

The commission will resume its public hearings on Thursday.

UDM leader General Bantu Holomisa is not prepared to serve in cabinet with those who still have Bosasa and Gupta matters hanging over their heads.
News
3 years ago

These individuals face allegations of under-declaring their incomes, overstating expenses, and misrepresenting their tax affairs.
Opinion
3 years ago
Next Article