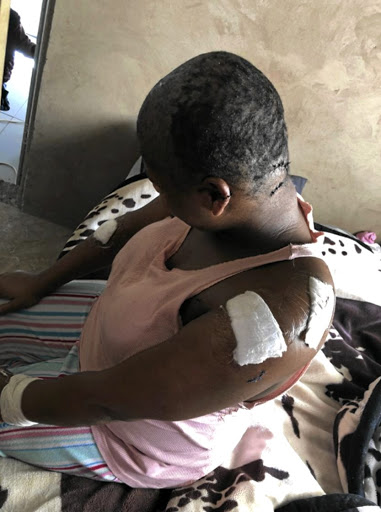 Vuyokazi Batyi was stabbed as she left the hospital after childbirth. / SUPPLIED

Vuyokazi Batyi has relived the horror of an attack at a public hospital, just two days after giving birth by surgery.

Batyi claims she was stabbed several times at Frontier Hospital in Komani, Eastern Cape, on June 11.

Batyi, 38, was on her way home with her new bundle of joy when the attack happened.

"I asked one of the cleaners to walk me to the taxis at the entrance of the hospital so she could help me with my bags.

"As we were walking through the hospital corridor leading to the taxis, we were approached by a man wearing a face mask.

"He came to us and forcefully removed the baby's blanket. He then said we should go to the toilets and I refused and that is when he took out an okapi knife and stabbed me in the face," Batyi said.

She said she fell down, dropping her baby in the process .

"He stabbed me [again] in the upper body. I kept on apologising even though I did not know what I had done. He went to my baby and he removed his pants and just left him lying there.

"At this point, I experienced breathing difficulties and he came back to me, to finish what he had started. The cleaner ran to call security officers but they refused to help.

A young mother has told how she delivered one of her twin babies inside a hospital toilet, unaided by nurses who shouted orders at her.
News
2 years ago

"I could hear people screaming and after that he left me lying in a pool of blood."

Batyi said security guards did not stop the man but threw stones at him as he walked out of the gate.

"I don't know what happened afterwards as I woke up in the intensive care unit with stitches all over my body. I am still traumatised.

"I live in Port Elizabeth. I had come [to Komani] to seek my mother's help with the newborn baby.

"I am glad my baby was not injured and my mother took him home on Friday. I was told that police were supposed to come for a statement but they didn't and I am too weak to go to the police station."

Tyelovuyo Buhlungu, owner of Tyeki Security Services that provides security at the hospital, said: "I was not there when the incident happened, it will be better for you to speak to the hospital's CEO."

Provincial health department spokesperson Sizwe Kupelo said the department regrets the incident and views it as a gross adverse event.

"Security of our staff and patients is paramount to us hence the presence of outsourced security services in all our health facilities. The department is convening an urgent meeting between the private security provider and hospital authorities. The matter has also been reported to the police," he said.

Provincial police spokesperson Sibongile Soci said: "A 35-year-old suspect handed himself to the police on the same day and was released on warning to appear in court."

Soci said they did not take a statement from Batyi because she was transferred to a hospital in East London.