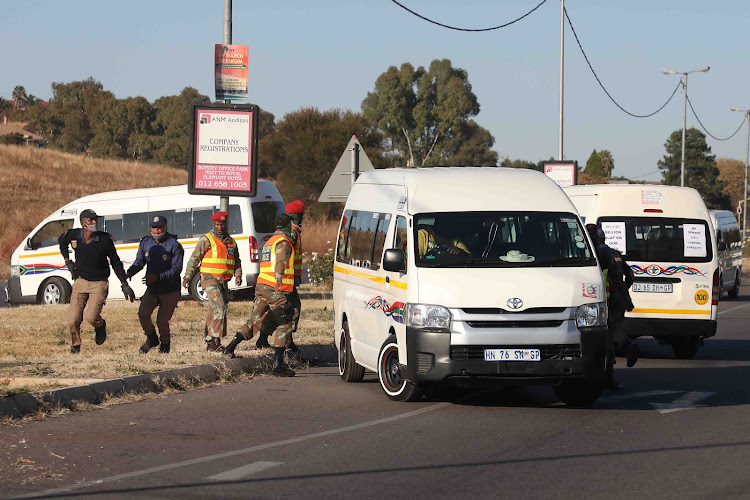 The biggest losers of the deadlock between the government and the taxi industry are commuters.

Yesterday, scores of workers were left stranded after the South African National Taxi Council (Santaco) in Gauteng halted all operations to express their unhappiness over Covid-19 relief funds.

The strike led to police firing rubber bullets to disperse taxi drivers who had blockaded major roads in Gauteng. Earlier in the day, some commuters decided to walk to work after they couldn't find transport.

Transport minister Fikile Mbalula announced a R1.13bn allocation for the sector on Friday. However, taxi men rejected the offer as it includes metered cabs and e-hailing service providers.

Santaco has described it as a "slap in the face" from the government, saying the money would not be enough to cover their losses. They want R20,000 per vehicle, but Mbalula said what they put on the table was the best they could offer.

We commend Santaco for committing to resume operations today as they wait for the minister to address them on whether they would be allowed to carry full loads and other issues.

Workers cannot afford to miss a second day of work or walk long distances to their jobs and arrive there tired as these would result in more job losses.

Thousands of South Africans have lost jobs because of Covid-19 financial losses as companies are shutting down. Experts had warned that as high as four million would be unemployed after the pandemic.

President Cyril Ramaphosa also warned us yesterday to expect more jobs losses, adding that it would take a long time for the economy to recover to what it was before the pandemic. The economy was ailing before the coronavirus, with an unemployment rate of 30% which is now expected to climb to 50% by next year.

With such a gloomy picture in the economic front, we cannot afford to further jeopardise employment for the few who have managed to keep their jobs by failing to provide transport for them to get to work.

We hope in today's meeting taxi operators and government will managed to reach an agreement that would be in the best interest of commuters.

Cape Town commuters were able to swiftly get to work while it was a vastly different scenario in Gauteng, as day one of a taxi strike got under way ...
News
1 year ago

The only thing stranded commuters could do on Monday was hope they could find alternative transport to get to work on time and avoid the prospect of ...
News
1 year ago

Transport minister Fikile Mbalula says the government is not able to provide more than the R1bn relief it is offering the taxi industry.
News
1 year ago
Next Article