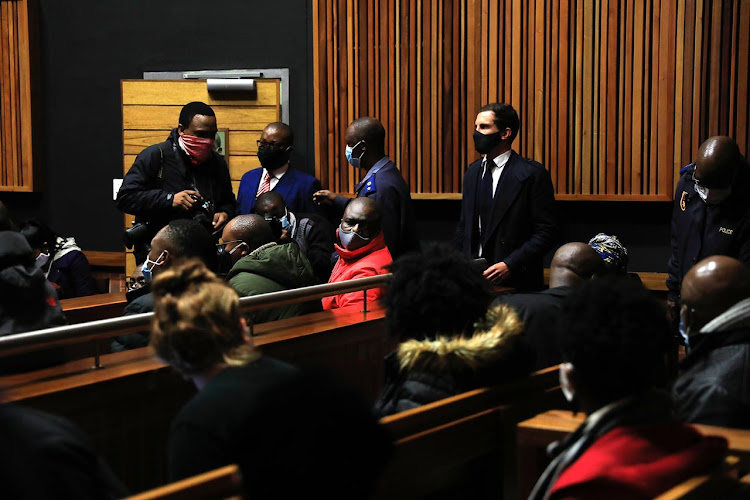 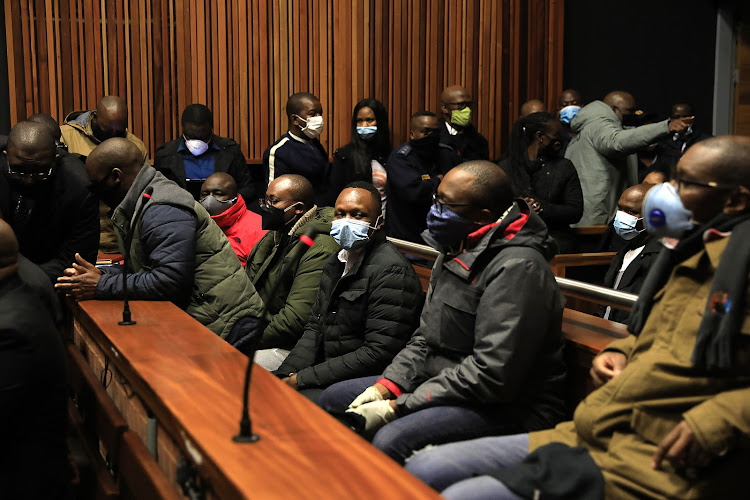 The eight men arrested in connection with the plundering of VBS Mutual Bank face a raft of charges including money laundering, theft, fraud and corruption.

The group appeared in the Palm Ridge Regional Court on Thursday morning.

The total amount of money they are accused of stealing by creating fictitious accounts is more than R1.5bn.

The state has lined up 42 witnesses against the accused.

These accounts controlled hundreds of millions of rand, some of which Matodzi used to bribe his co-accused, prosecutors allege.

Prosecutors also accused Matodzi of bribing all his co-accused and offering gratification in order to influence them “to act in a manner that amounts to the illegal, dishonest, unauthorised, incomplete, or biased exercise, carrying out or performance of any powers, duties or functions arising out of a statutory, contractual or any other legal obligation”.

Several senior officials linked to the R2bn looting of VBS Mutual Bank were arrested in a raid on Wednesday morning.
News
2 years ago

Between December 2016 and February 2018 Ramavhunga, the indictment shows, received about R19m into the account of “Dambale”, a company owned by Ramavhunga. Other accounts, held at VBS Mutual Bank, which Ramavhunga controlled, include those of Munyai Investments and another one named in the indictment as the “Ramavhunga” account.

Ramavhunga received R3.7m into the Munyai Investments account. The money came from the Vele and Vele Petroport accounts, the indictment shows.

Also, he received R795,000 into the Ramavhunga account from the Venmont, Vele and Petroport accounts.

Up to February 2018, Ramavhunga’s accounts had received a total of R23.4m.

The indictment shows that Truter received R2m into the FNB account of a company called Shangri La Investments.

The indictment shows that a Peter Mukhodobwane, who was the sole shareholder of Lamawave, was a front for Phophi Mukhodobwane, the former treasurer.

Malaba has been charged with fraud for signing off VBS bank's 2017 financial statements which gave the false impression that its finances were in a healthy state.

The National Head of the Directorate for Priority Crime Investigation Lieutenant General Godfrey Lebeya (SOEG) and the National Director of Public Prosecution Advocate Shamila Batohi briefed the media on June 17 2020. The progress of high profile priority cases, including the the latest developments into the VBS investigation were revealed at the briefing.

Malaba, Matodzi, Ramavhunga, Truter, Nesane and Magula were also collectively charged with “unlawfully, falsely and with the intention to defraud... shareholders, VBS creditors and the Registrar" approving the financial statements.

On the money trail against Malaba, the indictment shows that a company called Ihaawu Lesizwe, owned by Jacqueline Jaseman Malaba and Bafana Milundelwa Malaba, had the following accounts at VBS Mutual Bank: two vehicle finance accounts, a mortgage account and a classic business account.

Betanologix, another company owned by Jacqueline Jaseman Malaba and a Mwise Mapepo, also had an account at VBS Mutual Bank.

Up to March 2018 both companies, which the indictment claims were fronts for Sipho Malaba, received up to R29.2m.

Further, on Matodzi’s instruction, an amount totalling R654,000 was paid into the trust accounts of Makaula Zilwa Inc and NGL attorneys on behalf of Malaba.

The indictment shows that a company called Zanoware, owned by Alice Manye, was a front for Ramikosi. The company had received up to R750,000 from Venmont, one of the many accounts controlled by Matodzi.

The VBS financial statements painted a rosy picture while the bank was in actual fact insolvent.
News
2 years ago

Nesane, the prosecutors will argue, received up to R1.1m into the account of a company called Parallel Properties owned by Rudzani Ndwammbi.

Ndwammbi, prosecutors will argue, was a front for Nesane, as all monies received by Parallel Properties benefited the former PIC executive.

Also, on the instruction of Matodzi, prosecutors revealed that Nesane benefited from R5.6m which was paid into Parallel Properties from the Vele account.

The indictment shows that a company called Investar Connect Holdings, owned by a Lot Magosha, was a front for Magula.

The company was paid R2.8m for the benefit of Magula on instruction from Matodzi.

Another company, Hekima Capital, which had an account at VBS Mutual Bank, received R3.3m on behalf of Magula on Matodzi’s instruction.

In the indictment, prosecutors claim that all eight accused were associated and had formed an enterprise with the intention to defraud VBS Mutual Bank and enrich themselves in the process.

The first arrests in the VBS Mutual Bank looting scandal worth almost R2bn have been met with mixed reactions from minority shareholders.
News
2 years ago

“The accused among other made use of the following legally registered entities to wit VBS Mutual Bank, Vele Investments (Pty) Ltd, Vele Petroport Holdings SA (Pty) Ltd, Venmont Holdings (Pty) Ltd and Robvet (Pty) Ltd to provide continuity of structure for the unlawful activities of the enterprise.

“The accused all associated with the enterprise. Members of the enterprise gained overall control of the financial systems of VBS Mutual Bank.

“The primary purpose of the enterprise was to enrich the members and associates through the theft of money from the general pool of funds in VBS Mutual Bank.

“The theft of the money was covered up through various acts of fraud and money laundering.

“Members of the enterprise also received and made corrupt payments as indicative of their and/or other people, known and unknown to the state, participation in the theft, or at the very least, in the acts of fraud that covered up the theft.”