'I work very hard', says Malema on being re-elected unopposed 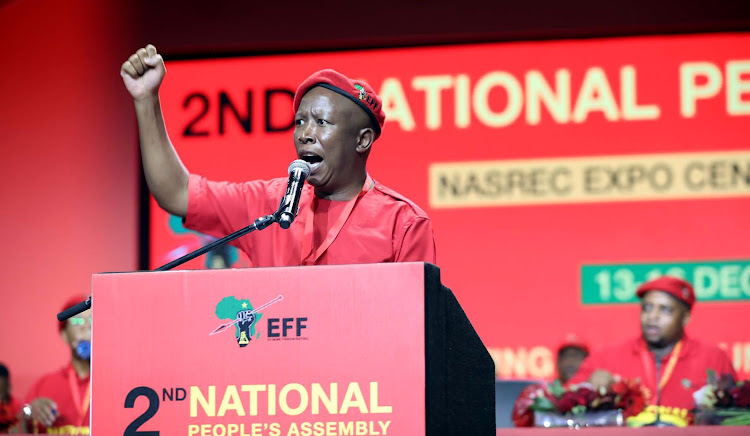 Malema was re-elected the EFF commander-in-chief unopposed on Saturday night at the party's second national elective assembly attended by 4,000 delegates.

He assumed the top six position with his preferred crop of leaders  who were said to be on his slate including his deputy Floyd Shivambu who was re-elected, treasurer general Omphile Maotwe, national chairperson Veronica Mente, secretary-general Marshall Dlamini and deputy secretary-general Poppy Mailola.

Malema said that his re-election unopposed had nothing to do with delegates fearing to contest him. "My simple thing of being re-elected unopposed is very simple; I work very hard," he said.

"I don't take anything for granted, you give it to me I will work on it and perfect it. I pay attention to the smallest detail."

Julius Malema will lead the EFF for at least the next five years.
News
2 years ago

“Don’t kneel before me. I don’t want that,” were the strong words by the newly re-elected EFF leader Julius Malema to delegates who knelt before him ...
News
2 years ago

Malema was addressing the media for the first time since he retained his position as the party's leader,  giving him five more years at the helm of the red berets. He reiterated his stance that he does not lose conferences and that he always gets the upper hand against those who contest him.

"Everything else I have I've worked for it and I've earned it. It is those who can't defeat me who call me names, that I'm a dictator. I will beat you, when it comes to conference I will beat you to a point where you go and slaughter a cow thinking that your ancestors have turned against you. I will whip you," Malema said.

Talking about his political successes, especially during elective conferences, Malema spoke about how as the ANC Youth League leader he managed to swing votes his way and also how he got a scared and shaking Jacob Zuma elected as the president of the ruling party in 2007.

"When Zuma got elected president, shaking, scared, we said to him 'old man don't be scared, we're taking this thing'. We went to him and told him in his face [that] 'you must never be scared, it's in the pocket president'. We took it [and] no one believed it," Malema said.

Malema said that coming into this assembly, he had been written off by the media and others over a myriad corruption allegations, including being linked to the looting that took place at the VBS Mutual Bank.

He said among his visions was that of an Africa led by the EFF where there would be one currency, one president and one judiciary. Malema said that the EFF would not only be a South African but an African political party.