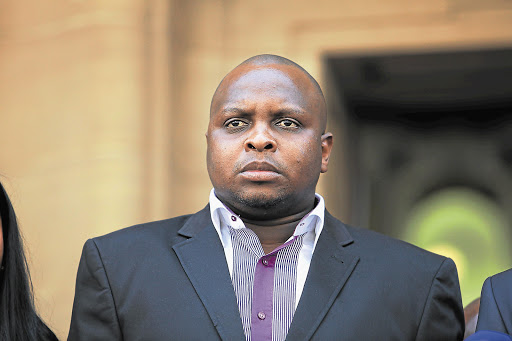 EFF deputy president Floyd Shivambu, pictured, his brother Brian and party leader Julius Malema were among individuals fingered in the 'Great Bank Heist' report. Hawks boss Godfrey Lebeya would not say whether political heavyweights would be charged but he promised 'no stone will be left unturned'. File photo.
Image: Times Media

The Directorate for Priority Crime Investigation - better known as the Hawks - is closing in on those involved in the looting of the now defunct VBS Mutual Bank, with eight arrests confirmed on Wednesday.

Most of the arrests are believed to be former executives of the bank. The Hawks and  the National Prosecuting Authority (NPA) are keeping their cards close to their chests as to who are the political figures on their radar for arrest.

Among those arrested on Wednesday is believed to be former VBS chair Tshifhiwa Matodzi.

Of the eight arrested on Wednesday, four had been served with warrants of arrest by the Hawks. Three other suspects were expected to hand themselves over on Wednesday, while one is in Covid-19 quarantine. The first seven will appear in court on Thursday.

The Hawks also conducted search and seizure operations at 10 premises in Gauteng and Limpopo.

The Hawks' investigation started in 2018 following the Great Bank Heist report by advocate Terry Motau, which lifted the lid on the looting of the bank to the tune of R2bn.

At the time, the report implicated several high-profile politicians and relatives of politicians. Among them was the ANC provincial treasurer in Limpopo Danny Msiza and deputy provincial chair Florence Radzilani, who was also executive mayor of Vhembe municipality. The duo were suspended by the ANC.

Another person who was implicated in the explosive report was Brian Shivambu, brother to EFF deputy president Floyd Shivambu.

Further investigations by the media following the Motau report showed that the EFF as well as Floyd Shivambu and party leader Julius Malema allegedly benefited indirectly from the loot that was for Brian’s benefit - in the form of companies linked to Floyd and Malema that did “business” with Brian’s company Sgameka.

Hawks boss Godfrey Lebeya would not say whether they will be pouncing on the political heavyweights. But he promised, “We will leave no stone unturned.”

Lebeya said the investigation would be directed by money flows and no individual would be left untouched should the paper trail lead to them.

The current seven suspects are facing 46 charges - including fraud, corruption, racketeering and money laundering.  This suggests there could be more arrests.

Several senior officials linked to the R2bn looting of VBS Mutual Bank were arrested in a raid on Wednesday morning.
News
1 year ago

The National head of the Directorate for Priority Crime Investigation (DPCI) says eight men have been arrested in connection with allegations of ...
News
1 year ago

Pressed on whether he had been in communication with Floyd Shivambu over their investigation into VBS, Lebeya remained diplomatic.

“I would not like to be dealing with communication with individuals because as a police officer on a daily basis, I receive calls from different people who are inquiring about aspects, be it an investigation we are conducting or otherwise,” he said. “So I can say from time to time individuals communicate with us, but the content of such conversations we will not divulge unless the individuals themselves want to go public.”

Lebeya refused to name specific political targets in the Hawks' sights as part of the investigation - at least for now.

“Whether some among the individuals we are investigating belong to the EFF, or the mayor [Radzilani], we are not investigating specific individuals but we are guided by the crime that has been committed and evidence at hand.”