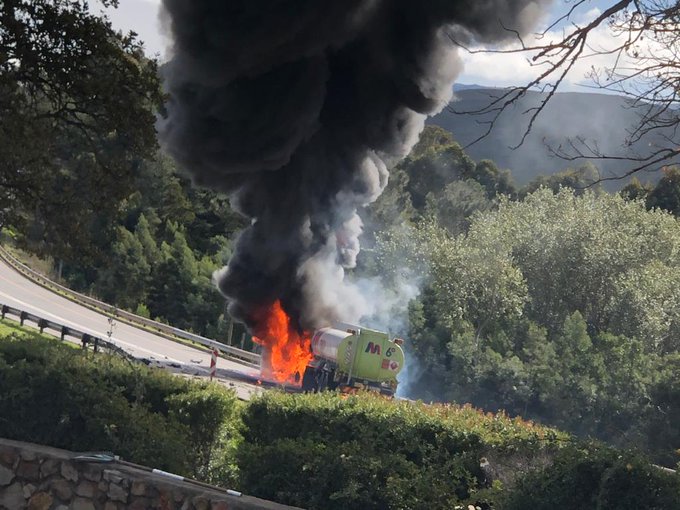 In a video of the accident doing the rounds on social media, a man can be seen getting out of a car which had run off the road and into bushes, then running towards the burning fuel tanker and lying down in the flames.
Image: Twiiter via @TrafficSA

Two people died, one on impact, after a car collided with an empty fuel truck on Houwhoek Pass, near Grabouw, in the Western Cape at the weekend.

In a video of the accident shared on social media, a man can be seen getting out of a car which had run off the road and into bushes. He runs towards the flaming fuel tanker and lies down in the flames.

“Get away there. No. Get away. No,” a woman bystander shouts.

A second man, believed to be the truck driver, can be heard explaining what happened to the bystander.

The woman asks the man if anyone has called the emergency services.

The driver replies that his company has alerted the fire and rescue services.

The two bodies were discovered at the scene after the fire was extinguished.

Rwexana said inquest and culpable homicide cases had been opened.

Several families lost their belongings and have been displaced after a fire ripped through an informal settlement in Durban on Friday.
News
1 year ago
Next Article