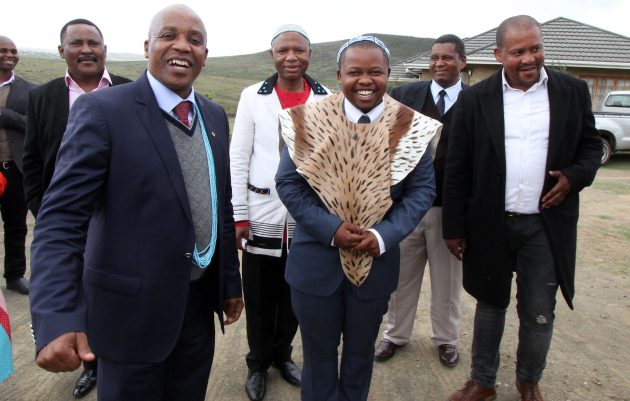 The AbaThembu royal family is locked in an imbizo behind closed doors to discuss the ongoing feud between AbaThembu King Buyelekhaya Dalindyebo and his son, acting king Prince Azenathi.

SowetanLIVE's sister publication TimesLIVE couldn’t confirm if Dalindyebo attended the imbizo held at Bumbane Great Place, 40km from Mthatha. Many royals arrived in bakkies while others walked to the gated palace.

In 2015 Dalindyebo was convicted of arson, kidnapping, assault with intent to cause grievous bodily harm and defeating the ends of justice. His son became acting king.

Although Buyelekhaya was released from prison, his son is still acting king.

The imbizo comes days after the Mthatha magistrate's court postponed an assault case against Azenathi.

It is alleged Azenathi assaulted Babalo Papu, an adviser to Dalindyebo.

Papu opened a criminal case after he was allegedly assaulted by some members of the royal family, including Azenathi.

Papu has accused Azenathi, his mother Buyiswa Majiki and Azenathi's spokesperson, uncle and adviser, Siganeko Dalindyebo, and others of assault with intent to cause grievous bodily harm.

Majiki is an Eastern Cape High Court judge and the former wife of Dalindyebo.

Dalindyebo last month disowned Azenathi and his claim to the throne, demanding a paternity test.

Dalindyebo is also out on warning after he allegedly trespassed at the Bumbane Great Place palace, outside Mthatha, in March, and allegedly threatened to use an axe to attack Azenathi.

Dalindyebo is living at the Nkululekweni residence in Mthatha, following his early release from prison in December last year. He served four years of his 12-year sentence when President Cyril Ramaphosa granted him special remission parole as part of a larger category of offenders.

The feud dates back to 2016 when Dalindyebo didn’t give Azenathi his blessings to act while he was incarcerated.

Dalindyebo wanted his wife to act on his behalf.

Last month, the royal family, known also as the Ngangelizwe royal family, wrote to Xolile Nqatha, MEC of co-operative governance & traditional affairs, asking him to explain why Azenathi continued to receive a salary/stipend, a state-sponsored vehicle and other benefits despite his acting period having lapsed on March 8.

Azenathi receives his salary on the 15th of each month.

Last Friday, at a press conference at Bumbane Great Place, Prince Siganeko Dalindyebo, his spokesperson, confirmed his nephew had been paid this month’s stipend.

The AbaThembu Royal family says there is "nothing untoward" about King Buyelekhaya Dalindyebo wanting to do DNA test to prove whether Prince Azenathi ...
News
2 years ago