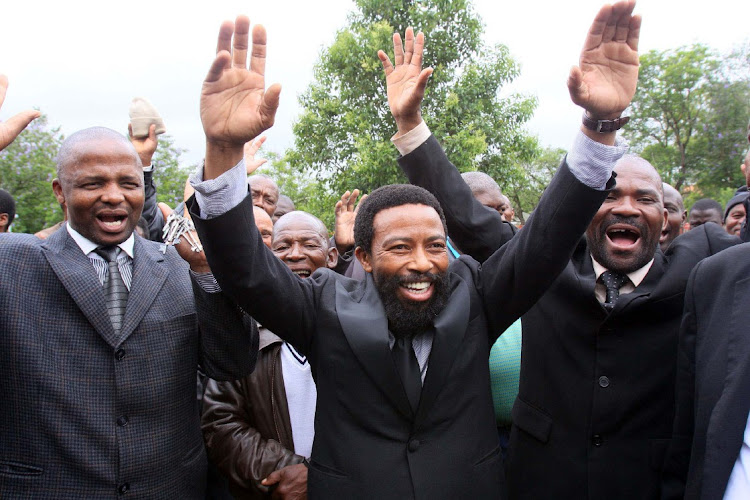 Amid the joy at the release on parole of AbaThembu King Buyelekhaya Zwelibanzi Dalindyebo came news that he will not immediately resume the throne, but will ask someone to act on his behalf.

This was confirmed by his spokesperson, Prince Mthunzi Ngonyama, who confirmed his release on Monday morning.

Some of the victims of his violence, though calling for his release, have expressed dissatisfaction at his failure to compensate them R400,000 each.

''There are conditions which allow the king to seek employment. But Zwelibanzi is a king so he would not be seeking employment as he already remains a king. Though his certificate for kingship is still intact and was not withdrawn, he will not immediately resume his throne but will look for someone to act on his behalf,'' said Ngonyama.

AbaThembu King Buyel'Ekhaya  Zwelibanzi Dalindyebo is a free man. He was released from the East London Correctional Centre in West Bank at around  ...
News
2 years ago

His eldest son, Prince Azenathi Zanelizwe Dalindyebo, has been acting for his father.

Though Dalindyebo chose Azenathi to act for him in October 2015, days before his incarceration he changed his tune and dumped Azenathi for his wife, Queen Nokwanda.

Dalindyebo's brother, Prince Mankunku Dalindyebo, was a strong contender for the acting position, but Azenathi finally won and later reconciled with his uncle.

It is not yet clear whether the king will propose that Azenathi continue acting or will opt for Azenathi's stepmother, Queen Noluntu Dalindyebo, with whom he is staying in Nkululekweni.

Mthunzi said it would not be ideal for the king to interact with the media immediately as journalists may pose provocative questions.

Dalindyebo has been released on parole after serving a minimum sentence.

"The minister said that the king qualifies for parole as of October 2019. This is not to be confused at all with remission of sentence which was granted. His sentence will be reduced by one year, but it does mean that he is on parole subject to certain conditions, which were set by the correctional services parole board.

“Unfortunately I am not in position to explain what those conditions are as they differ from one individual to another.”

Phiri said the king's request for a presidential pardon was still with the presidency.

Ngonyama said  the king was released at midnight on Sunday and arrived in Mthatha about 2.30am on Monday.

''We are thankful the king is out of jail even if it means a parole and not the presidential pardon we are still pressing for. We take this opportunity to thank all the people who supported us in our activities to call for the release of the king. It was a long and strenuous four years. We now hope that our king will find time to be with his family, find peace and reconnect,'' said Ngonyama.

He said  they were happy the king would spend Christmas with his family for the first time since 2015, a few days before he handed himself over to prison authorities in Mthatha on December 31.

Ngonyama said  there would be some rituals for the king to undergo, including cleansing himself because he had arrived from prison.

Ramaphosa given until Monday to release AbaThembu King or else...

Dalindyebo was released from the correctional centre in West Bank, East London and was taken by correctional officers to his Nkululekweni home in Mthatha.

The Ngangelizwe royal family chair, Nkosi Thanduxolo Mtirara, who in 2012 removed the customary spear (symbol of leadership as the heir) from Dalindyebo, accusing him of unroyal behaviour, welcomed the release — though with a caveat.

''We welcome his release and we still regard him as one leader and heir as AmaDlomo. But there are things that he has to fix to build a united nation and restore the dignity of the nation. We will return the customary spear when we find that he is indeed fit to do so,'' said Mtirara.

Five of Dalindyebo's seven victims, who have reconciled with him, were excited about his release.

But all of them said they were still waiting for their R2.8m compensation from the king — R400,000 each.

Wayiya Sonteya, 79, who is confined to a bed after a stroke, said: '' I can die a happy man now as my king has been released.”

His father might be languishing in jail while he fights to keep the throne warm‚ but abaThembu Prince Azenathi Dalindyebo will put that aside as he ...
News
5 years ago

He said both Azenathi and his father had humbled themselves and apologised profusely.

“I am now sick with stroke and diabetes and did not want to die before he is released and we reconcile.”

Victim Mbuzeni Makhwenkwana said they all welcomed the news. “But we all want him to have a presidential pardon. Zwelibanzi is our king."

Dalindyebo served one third of his 12-year jail term for crimes he committed between 1995 and 1996 at Tyhalarha village.

The king torched three properties belonging to local men, and kidnapped a woman and six children.

He was initially sentenced to 15 years in jail by Mthatha high court judge Sytze Alkema, but successfully appealed and had his culpable homicide conviction overturned.

This charge was as a result of the death of Saziso Wofa, 18, who died after an assault.

His release came after President Cyril Ramaphosa and justice minister Ronald Lamola on December 16 indicated that Dalindyebo could soon be a free man — albeit on parole and benefiting from the “remission of sentences” announcement by Ramaphosa earlier that day.

The remission was for a period of 12 months.

Four Eastern Cape royals will meet the ANC’s top six‚ led by President Jacob Zuma‚ to plead for the release of the jailed abaThembu king Buyelekhaya ...
News
5 years ago

Constitutional Court fails to give leadership on AbaThembu king matter