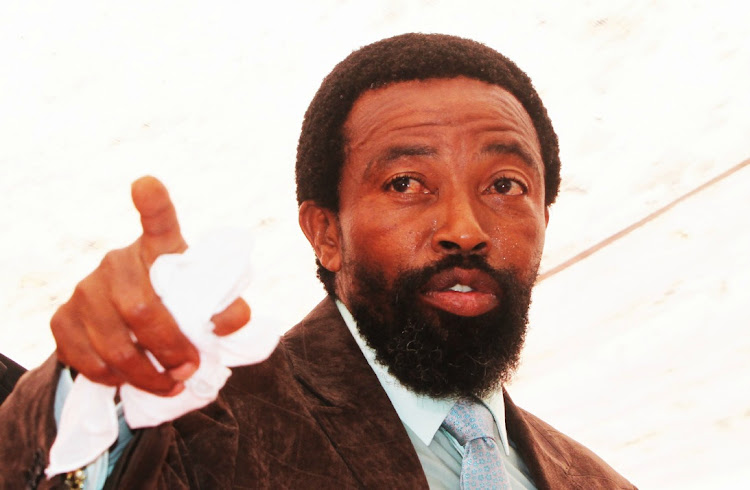 The bitter feud that has split the AbaThembu royal family has taken a new twist, with King Buyelekhaya Dalindyebo disowning his son and demanding DNA tests to prove whether Prince Azenathi is his offspring.

Dalindyebo was arrested in March for a middle-of-the-night rampage that allegedly involved him terrorising Azenathi and his family at their royal Bumbane Great Place homestead.

It is alleged he brandished an axe during the siege. The king was released on parole in December.

Now a text message, sent on Tuesday by Dalindyebo to his wife and Azenathi’s mother, Queen Nocollege Dalindyebo, has shown the full extent of Dalindyebo’s determination to distance himself from his son.

The queen is a judge, when she goes by the name of Buyiswa Majiki.

The message, circulated widely on social media on Wednesday, demands a paternity test to investigate Dalindyebo’s claim that Azenathi is not his biological son.

AbaThembu King Buyel'Ekhaya  Zwelibanzi Dalindyebo is a free man. He was released from the East London Correctional Centre in West Bank at around  ...
News
2 years ago

Though Dalindyebo did not directly speak to DispatchLIVE, representatives Prince Mthunzi Ngonyama and Prince Lubabalo Papu confirmed the message had come from the king.

Nocollege and Azenathi declined to comment, other than to say they had seen the message.

''This just makes me laugh. I think he [Dalindyebo] is better placed to answer,” Azenathi said.

Ngonyama and Papu wanted to make the king’s position clear.

“'His majesty has finally welcomed that Azenathi is [allegedly] not his biological son and his mother is a divorcee — they both have no legitimacy as royalty,” they said.

“His majesty has communicated this with both Azenathi and his mother. This was suspected for a very long time until proof was acquired.

“His majesty gave Azenathi an option of taking a DNA test if he claims to be his son.”

According to Dalindyebo’s representatives, the Bumbane royal palace was “officially closed”.

“AbaThembu can reach his majesty at his Nkululekweni residence. Azenathi has three alternatives as homes —  his mother’s Port Alfred house, his mother’s Ngqamakhwe home where he was born ... and his biological father’s home.

“The king is the king by birthright and he will remain a king until his death. The decision to make this public knowledge is for AbaThembu not to be misled or manipulated by anyone.”

The princes said this was “a very personal matter for the king” and  he was not available for media interviews.

“The king received a tip-off from somebody reliable who knew the history of both Zwelibanzi [Dalindyebo] and Nocollege, as well as Azenathi back in the day.

“Nocollege and the king were just dating. The information was that Azenathi is not Zwelibanzi’s son.

“The king was not shocked as he had been suspicious, but had nothing to back up his suspicions,” Ngonyama said.

“He then asked Azenathi and his mother to go for a DNA test, but they have not responded. Then he decided to let the pubic know that Azenathi is not his son.

“He is hoping that perhaps they will be pressured to take the DNA tests.

“It is the right of any parent to ask for DNA tests if there are suspicions.”

The tip-off was received last week, he said.

Azenathi, though a son of a king, did not undergo the traditional initiation rites at his father’s home as is the custom but instead at his mother’s home in Ngqamakhwe.

Papu said  the king was “forced” by Nocollege and Azenathi to have the rite done in Ngqamakhwe instead of Bumbane.

Azenathi’s clan grandfather and chair of the king’s council, Nkosi Thandisizwe Mtirara, said he was “disgusted” by the text message.

“He sees that he is his son. He is like a copy of himself. But we will not like to discuss such things in the media.

“First, this thing [claim] was never taken to us as AmaDlomo or the family.

“This is  intolerable,” Mtirara said.

The AbaThembu have been looking for an acting king since Azenathi’s period as acting king expired in March.

Azenathi has been acting for his father since Dalindyebo was jailed in December 2015 after being found guilty of arson, assault with intent to do grievous bodily harm, defeating the ends of justice and kidnapping.