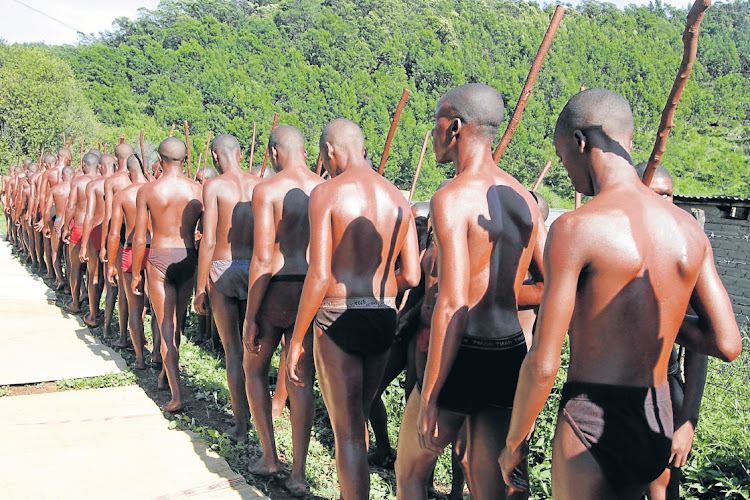 Zolani Mkiva, secretary-general of Contralesa, said the national executive committee of the Congress of Traditional Leaders of South Africa held a virtual meeting in April and unanimously resolved to not only suspend the winter season but to cancel it.
Image: LULAMILE FENI/DAILY DISPATCH

The Congress of Traditional Leaders of South Africa (Contralesa) has warned that the winter initiation season could become fertile ground for the coronavirus to spread quickly among initiates.

Zolani Mkiva, Contralesa secretary-general, said the institution’s national executive committee (NEC) had unanimously resolved to not only suspend the winter season, but to cancel it.

“We could not afford to risk the lives of our children. Of course, it was not an easy decision but Covid-19 has disrupted everything in the universe and this makes the year 2020 an unusual year in the history of human rights,” he said.

Mkiva said the cancellation followed the extensive consultation process involving all the various cultural committees that practice the custom of the right to passage from boys to men from all the nine provinces.

“We had to ensure that we have spoken to all leaders. The universal cancellation of the winter initiation season is unprecedented, it is something that has never happened in our lifetime,” he said.

Mkiva said anyone found disobeying the order to cancel the initiation would face the wrath of traditional authorities and the full might of the law.

“We want to emphasise that there will be serious consequences for anyone violating the regulations that speak to the cancellation. As to what happens after, we will look into the situation of the spread beyond the winter season and then we will make a decision informed on whether this virus is declining or escalating. So at this point, we can’t make any decision as to what will happen next, whether we are cancelling for the whole year or not. For now, we have cancelled for the winter season,” Mkiva said.

“Post the national lockdown an assessment will be made about the upcoming summer season,” he said.

Ngam said anyone found operating an ibhuma would be prosecuted using the regulations governing Covid-19 as well as the provisions of the Customary Male Initiation Practice Act.

Matthew Mpahlwa, AbaThembu Royal family adviser, supported the decision to suspend the winter season stating that the right to life takes precedent over any customary rite of passage.

An owner of an initiation school in Pretoria, Mac Thobejane, said he would be adhering to the order.

The 83-year-old man said in a normal winter initiation season, he would have been preparing to receive more than 60 initiates.

“We will not be operating, due to the virus,” he said.

Contralesa secretary-general Zolani Mkiva has confirmed that the winter initiation season has been suspended.
News
1 year ago

Lockdown? Life continues as normal in some parts of the Eastern Cape

From boys illegally being circumcised to the elderly attending traditional ceremonies in their hundreds and budding sports stars honing their skills, ...
News
1 year ago
Next Article