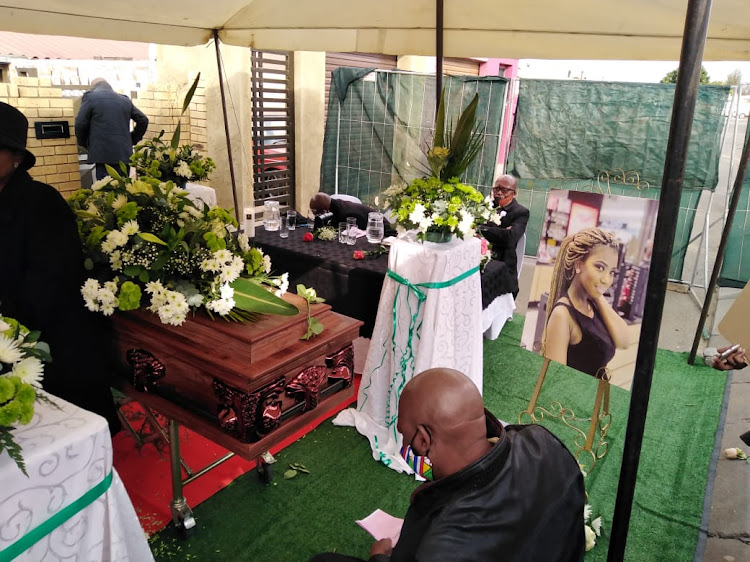 The young woman was laid to rest on Thursday
Image: Veli Nhlapo

Emotional scenes played at the funeral service of a slain Soweto woman who was found hanged on a tree. Tshegofatso Pule, 28, who was eight months pregnant was found murdered after she went missing for three days.

Emotions were high at her Meadowlands home where only 50 people were allowed to attend as police and soldiers barricaded the vicinity. Tumisang Katake, Pule’s uncle told mourners that his niece’s death came as a triple tragedy.

“Last Saturday I buried my cousin who was killed by a man who was meant to protect her. She was shot with four bullets by husband after they got married in February,” he said.

He said Pule did not deserve to brutally murdered. He said as a lawyer, he represented criminals who have raped and killed but he will not do so going forward.

“I’ve represented many criminals including those like the Karabo Mokoena guy.I’ve taken a pledge that if you’ve raped, killed your girlfriend or molested a child - f*tsek!” he said.

He urged community members to be patient with the police and the wheels of justice as he believed that the those who are behind her murder will be arrested. His comments came shortly after a neighbour told mourners that she would take matters into her own hands if she found Pule’s killer.

Honey Molokwane said: “if I had a gun, I would blow his brains in court. How could they take two souls at the same time? We don’t want see whoever is responsible for this to be running around the streets because there is a lack of evidence. Lack of evidence my foot maan!”

Grace Mbobo, a family member said their joy and excitement was snatched from them when they received news of Pule’s death.

“There would have have been 38 grandkids in the family with Tshego’s unborn child. We were all excited but now that excitement has been taken away from us,” Mbobo said.

She said Pule was not an aggressive character but was peaceful and coy.

“For her to die in such a brutal manner was not fitting of her character. But death doesn’t discriminate and comes to us all,” she said.

Mbobo said the family was prepared to help Pule raise her child after the man who impregnated her refused to meet with them.

“Into her seventh month she called us and we tried to consult the so called baba and he ducked and dived for four Sundays until we told Tshego to forget about him and we’ll raise the child. While looking forward to that but she went missing and it was confirmed on Monday morning,” she said.

Amongst those who were in attendance included EFF politician Mbuyiseni Ndlozi who said Covid-19 made it difficult for people to support Pule’s family.

Ndlozi criticized the police and soldiers, accusing them of being heavy handed in matters related to Covid-19 but failed to protect woman and children.

“Police are here but where were they when Tshego needed them most. The military is here. More than fifty of them are here but we don’t need them when we mourn. We need them to stop the killing,” he said.

The heavily pregnant woman who was found hanging from a tree on Monday will be buried tomorrow.
News
1 year ago

Tshegofatso Pule and Naledi Phangindawo are the latest victims to make headlines, many die unpublicised
Opinion
1 year ago
Next Article