'No more room to keep social distancing at schools' 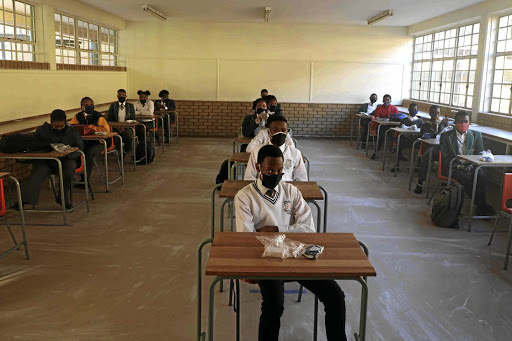 Grade 12s at Phulong Secondary School in KwaThema, Springs, go through an induction on how to protect themselves and social distance to mitigate against the spread of Covid-19./Thulani Mbele

There will be no space for social distancing in class in some schools when the next batch of pupils are expected back at school next month.

This much was evident yesterday in several schools in Limpopo and Gauteng as they reopened their doors to grade 7 and 12 pupils for the first time in over two months due to the outbreak of coronavirus.

The stark reality of not having enough classrooms for social distancing became too much to contemplate for some principals of schools in Limpopo who said they had been told to wait when they requested extra mobile classrooms.

Yesterday, a principal at a primary school in Bolobedu, Limpopo, said he was worried that the 61 grade 7 pupils have occupied three classes out of the 12 the school has.

"We have over 500 pupils in our school and we can't accommodate all of them if we are going to adhere to the social distancing guidelines.

"We are facing a crisis because there is going to be a massive overcrowding," he said.

The principal, who asked not to be named, said when some of them raised the matter during a circuit meeting, they were told to focus on the first batch of pupils.

He added that his school has identified one classroom to serve as an isolation room for now.

Another high school principal said his grade 12 pupils have already occupied four classrooms and the other remaining four will only accommodate the grade 11 learners.

"It is going to be impossible to welcome all the learners into our school. We need 10 more classrooms to be able to cope," he said.

He said after consultation with the school governing body they decided to teach certain grades once per week.

Some Ntokozo Manana woke up at 4am yesterday to prepare herself for the first day back at school, but was one of the grade 12 and 7 pupils who were ...
News
1 year ago

He added that if the school picks up symptoms on a pupil, protocol required them to call the department of health.

In Gauteng, education MEC Panyaza Lesufi said while he was happy with the first day for grades 7 and 12, he was worried about when other pupils come back.

"I think that is when we have to go back to the drawing board. We need to plan appropriately and make sure we don't have the challenges we are faced with today. We have a month to plan for the next
intake and the schools are also finalising the methods that they would prefer for the next intake of learners.

"For instance, other schools will prefer a weekly rotation and others a daily rotation and that will determine what is it that the department needs to do," he said.

He said some schools did not open as a result of vandalism, theft and break-ins.

"We received reports in the early hours of Monday [yesterday] that criminals broke into one of our schools in Orange Farm with the intention of stealing PPEs meant for learners," Lesufi said.

"The community alerted the police and the criminals were immediately arrested and all the stolen PPEs were recovered," he said.

"I am happy with parents and community members assisting us on weekends to safeguard our schools."

Saviour Association of School Governing Bodies advocate Caiphus Moshutla said the government was risking the lives of children in schools where there was not enough classroom space.

"We received complaints already that some schools don't have space for learners because grade 12s were occupying many classrooms in their respective schools.

"It is not going to be possible for some schools to welcome the rest of the learners in July," he said.

Mixed fortunes for Mpumalanga schools on first day back

Some schools in Mpumalanga did not open yesterday as parents feared for the safety of their children, while the poor state of one school forced ...
News
1 year ago

It was all systems go for most Gauteng schools on Monday morning.
News
1 year ago

Pupils and teachers across the country officially return to schools on Monday, June 8, the first day of class during the Covid-19 lockdown for grades ...
News
1 year ago
Next Article