Mixed fortunes for Mpumalanga schools on first day back 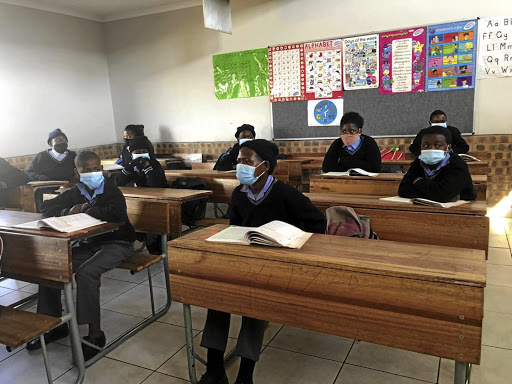 Pupils from Mokibe Primary School in Driekoppies were taken out of their school because it is so dilapidated and placed at Mogalitwa Primary School. / MANDLA KHOZA

Some schools in Mpumalanga did not open yesterday as parents feared for the safety of their children, while the poor state of one school forced pupils to be relocated.

At Mpumelelo Primary School in Driekoppies, outside Malalane, not all pupils turned up as some parents feared for their children's safety as the school is in a poor state, with few toilets and a shortage of water for pupils and teachers.

Lugebhuta High School in the Nkomazi municipality in Schoemansdal, outside Malalane, also had a poor turnout as some parents were not certain if the school was ready to resume classes.

Mokibe Primary School in Emalahleni is so dilapidated that 37 pupils were forced to relocate to Mogalitwa Primary School, about 500m away.

Premier Refilwe Mtshweni-Tsipane, who was in Emalahleni during the reopening of schools, expressed her disappointment at the poor state of Mokibe Primary.

Mtshweni-Tsipane said more than 20 mobile classrooms were donated by a local mine and businesses for the affected pupils at Mokibe Primary and would be in operation next week. In the meantime, the pupils will continue to attend classes at Mogalitwa.

The premier said they had budgeted to build a new school on land in Emalahleni where Inyanda mine had already drilled a borehole.

"Let me express our disappointment [at the state] the school is in.

"Equally, let's say we were aware of the school situation," Mtshweni-Tsipane said.

The Professional Educators Union have raised concerns about the state of readiness of the re-opening of schools at three rural provinces on Monday.
News
1 year ago

Lowveld High School in Mbombela remained closed after parents were issued with letters on Friday stating that two staff members had tested positive for the contagious coronavirus last week.

However, everything went well at Cyril Clarke High SCH and John Mdluli Primary schools at Mataffin village in Mbombela.

Parents brought their children to school early and they were well received and followed Covid-19 restrictions by maintaining social distancing, wearing masks and had their hands sanitised.

Walter Hlaise, provincial secretary of the South African Democratic Teachers' Union (Sadtu), was expected to meet its members late yesterday to get reports from them about their first day back at school.

"As it's the first day, we're waiting for reports from our members throughout the regions and we shall know if our members and learners are safe in their schools."

Hlaise said it was not all doom and gloom yesterday.

"We can say that on the first day about 95% of schools opened and teaching and learning [were] going on fine. But we have schools like Mpumelelo Primary, Lowveld High School and others that didn't start well. But our assessment will also be done... as the week progresses," said Zwane.

Some Ntokozo Manana woke up at 4am yesterday to prepare herself for the first day back at school, but was one of the grade 12 and 7 pupils who were ...
News
1 year ago

However, the association of school governing bodies in the province said it was disappointed at the large number of schools that did not open because they were either not fumigated or did not have enough water.

"Let's say that we are not pleased with the start of the school. What the [education] department said - that about 43 schools would not be ready by Monday - the number is found to have been very high," said the association's president, Elphas Maseko.

"For an example, township schools are the ones that opened well, but you go to schools in tribal areas, there are no plans to have them opened by the department.

"Some have not been fumigated, some have no water and some learners surprisingly have been given surgical masks, which means as they each got two, they will not be able to attend schools after two days. That is against what the department has promised."

Parents were issued with letters on Friday about the status of the affected teachers.

Zwane said though the officials tested positive before the schools opened on Monday, they have also tested colleagues who might have had contact with them.

He said the school would only be ready to open after all the staff were given the all clear.

It was all systems go for most Gauteng schools on Monday morning.
News
1 year ago

Pupils and teachers across the country officially return to schools on Monday, June 8, the first day of class during the Covid-19 lockdown for grades ...
News
1 year ago

No more playing, eating outside during lunch is the new normal at school

Eating in classrooms and no playtime during breaks will be the new normal at school, said a principal.
News
1 year ago
Next Article