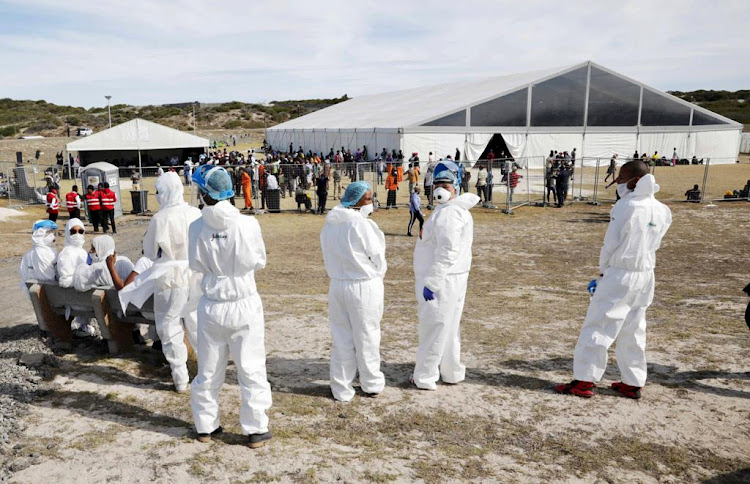 One of the main housing tents at the Strandfontein facility.
Image: Esa Alexander

The briefing, entitled "The City of Cape Town’s Strandfontein Camp: Lack of Disclosure, Levels of Failure", was to be chaired by Community Chest CEO Lorenzo Davids.

But council lawyers said it was a way for Davids and other organisations advocating for the rights of homeless people to pre-empt a court hearing on Thursday in which the city is seeking relief from “misinformation” it claims individuals in these organisations are spreading about conditions at the camp.

The invitation to the briefing said the groups had been called to respond to council claims that “all is well at the Strandfontein camp, where street-based people have been held since the beginning of the lockdown”.

They said the closure of the camp, which is reportedly scheduled to take place on May 20, was being approached in an “untransparent and messy manner”.

Greg Wagner, spokesperson for mayor Dan Plato, said city lawyers wrote to Davids and others “about the appropriateness of having such a press conference, as well as the continued attempts by Mr Davids and others to spread misinformation”.

Beneficiaries of social grants and homeless people living in shelters believe they should not have been excluded from the Covid-19 R350 relief grant ...
News
2 years ago

Residents whose homes were demolished during a dramatic eviction in Lawley can now have some hope after the SA Human Rights Commission intervened to ...
News
2 years ago

He added: “It was pointed out that the matter was sub judice and it was not appropriate for Mr Davids and others to arrange for a press conference a day before the court hearing to spread further misinformation. It would seem Mr Davids and others do not have faith in the legal system and have opted to litigate in the press instead.

“It was further pointed out if they are not going to desist from spreading false claims, they will be charged criminally - as provided for in the disaster management regulations.”

The ANC in the Western Cape has called for the camp to be closed and for homeless people to instead be housed in community centres around the city.

But on Wednesday, the ANC's provincial social development spokesperson Gladys Bakubaku-Vos accused the city of “releasing a health timebomb” by deciding to close the site and “sending homeless people from the Strandfontein site back onto the streets”.

“We find it alarming that homeless people have now been allowed to leave Strandfontein with no apparent plan having been put into operation to accommodate them. If they presented a health risk in March, surely that risk must have escalated while they were held in Strandfontein?” she said.

On April 30, Plato said the site was always a temporary measure and would be closed.

A group of civil society organisations have identified gaps in the government’s relief funding which has been allocated to boost the economy and ...
News
2 years ago

The Covid-19 death toll in the Western Cape has reached 28, and Khayelitsha is now home to 11% of Cape Town's infections.
News
2 years ago
Next Article