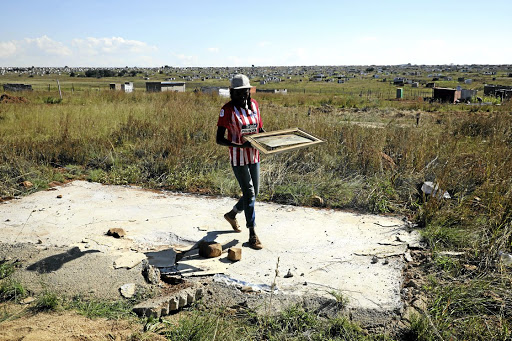 Nosiqniseko Masih is holding a picture frame as she picks through the remains of her demolished shack in Lawley./ANTONIO MUCHAVE

Gubana who said he bought a stand in the area for R2,500 last year spoke of how he fought off the demolishers from taking down her own shack.

"We bought the stands for R2,500 each and we were hoping to stay peacefully in our own places after struggling to get houses for a long time," said Gubana.

He said the Red Ants men arrived yesterday morning packed in a bus and started demolishing shacks that were unoccupied.

"I had gone to the shop to look for something to eat. I arrived a little too late because I found the Red Ants already destroying my uncle's shack; mine survived because I fought."

Human settlements minister Lindiwe Sisulu has condemned the evictions of people from informal settlements by the Red Ants in Gauteng, saying the move ...
News
2 years ago

Cape Town announced on Monday that it had returned seized building material to 49 households that were removed from municipal land in the middle of ...
News
2 years ago

Gubana said his uncle was devastated, and too traumatised that he did not even come to see what was left of his shack.

He said the uncle lost R8,000 worth of building materials and the stand itself.

"When we go to the offices where we bought the stands there is no one now, we are given a run around. We need the government to understand that housing is a burning issue that has made us desperate and vulnerable to criminals to take advantage of our situation."

Gubana said he applied for a house 19 years ago but when he began losing hope on an RDP, he used his savings to buy a stand.

Another resident who witnessed the demolitions was 63-year-old Nolungime Ntongana who said she was living in fear of losing her shack.

"I stay alone and live on my pension money. I failed to get a house long ago, my children are renting in the township. I thought I could secure a stand for them to call home one day but here I am feeling like a criminal who has to run from police every day," she said

Ntongana said the police and Red Ants have treated them like criminals since last week, by chasing them around and kicking them out of their homes. "I'm old I don't have the energy for this; can the City of Johannesburg come up with a fair resolution because we bought stands here, not knowing we would be evicted."

In a statement released yesterday morning, the Joburg mayor Geoffrey Makhubo said he noted the judgment of the South Gauteng High Court with regards to the land invasions and subsequent actions by law enforcement in Lawley.

"As stated previously, as a city we do not celebrate these routine court victories. Our preoccupation is the prevention of land invasions for the sole purpose of implementing planned development within the city for the benefit of the poor and growth of the city."

Makhubo said the city would continue to offer support to the homeless.

He said seven people were arrested for illegal land invasions.