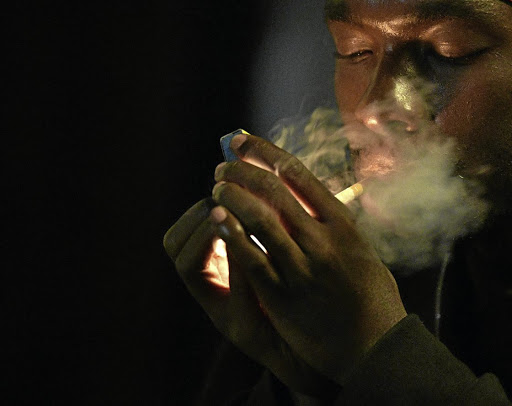 Goodwill Shivambu takes a puff of a cigarette at Nkowankowa, Tzaneen, during the national lockdown./ Gallo Images / Lefty Shivambu

Tobacco manufacturers have labelled the state's ban on the sale of cigarettes "unlawful" because it was not gazetted under lockdown level 5 rules and no rational basis has been provided for the ban.

Fair Trade Independent Tobacco Association (Fita) filed court papers in the North Gauteng High Court in Pretoria yesterday, challenging the ban during lockdown level 4, citing an omission of such prohibition of trade in the provisions of the initial laws established in terms of the National Disaster Act.

Fita asked that, if health was a factor, why was there no prohibition on unhealthy goods such as junk food, chocolates, fizzy drinks and sweets.

It said the items had been associated with illnesses that leads to death but had not been banned. Fita, which represents eight cigarette manufacturers, also questioned the source of the state's power to prohibit the sale of cigarettes.

They put the blame squarely on cooperative governance minister Nkosazana Dlamini-Zuma as the person allegedly behind the government's move to ban cigarette sales.

Dlamini-Zuma is cited in the court papers alongside President Cyril Ramaphosa.

Fita wants the court to force the government to, among others, lift the ban on cigarettes and other tobacco products.

Fita chairperson Sinenhlanhla Mnguni, in his affidavit, singled out Dlamini-Zuma, citing her tenure as health minister between 1994 and 1999 that "she spearheaded legislation that eventually banned smoking in public places, prohibited all forms of tobacco advertising and promotion and recommended penalties for transgressors".

"None of the ministers, most importantly the minister of health, Dr Zweli Mkhize, had demonstrated how a prohibition on the sale of cigarettes
assists in preventing or reducing the spread of covid-19."

He requested access to minutes of the national command council's meeting after Ramaphosa had told the nation that the sale of cigarettes would be allowed under level 4.

Legal purchase of cigarettes unlikely before May 26, even as industry challenges ban

The Fair-Trade Independent Tobacco Association is pursuing legal action to set aside disaster regulations and declare tobacco products as essential ...
News
2 years ago

Dlamini-Zuma's spokesperson Lungi Mtshali said: "The case is against government not the minister as an individual in her personal capacity. This [ban on cigarette sales] is the decision of the national command council as the president outlined earlier."

British American Tobacco South Africa (Batsa) had also given the government until 10am yesterday to give clarity on the decision to continue
imposing the ban on cigarette sales or face legal action.

Ramaphosa addressed the matter in his weekly online newsletter, defending Dlamini-Zuma, saying the decision on the ban on tobacco sales was a collective decision.

"A decision like this is bound to be controversial, but it is wrong to suggest that there are ministers or a president doing and saying whatever they want on this matter," Ramaphosa said.

"On 23 April, I announced that cigarette sales would be permitted during level 4. This was based on the view of the national coronavirus command council (NCCC), and which was contained in the draft framework that was published for consultation. After careful consideration and discussion, the NCCC reconsidered its position on tobacco."

Meanwhile, the SA Informal Traders Alliance which represents hawkers, spaza shop owners and home-based operators across all nine provinces, expressed its alarm at the decision to extend the ban.

But the National Council Against Smoking welcomed the decision to uphold the ban on tobacco sales, saying there is an increasing body of evidence showing that smokers who contract Covid-19 experience more severe disease progression than non-smokers.

Dlamini-Zuma will know who's boss

In March, President Cyril Ramaphosa announced that the ban on the selling of cigarettes would be lifted in keeping with the relaxation of the ...
Opinion
2 years ago

A cursory read of the Sunday press yesterday suggests that our courts are about to get very busy in the next few days.
Opinion
2 years ago

British American Tobacco South Africa is threatening to go to court if the government does not concede to its demand to have the ban of tobacco ...
News
2 years ago
Next Article