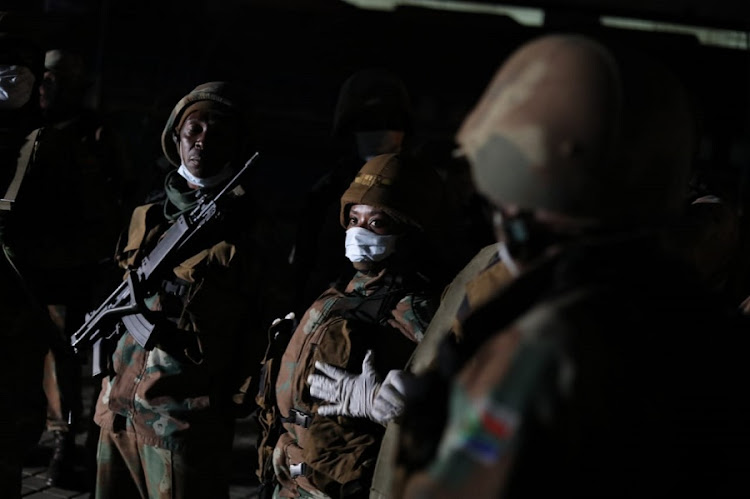 Two SANDF employees have been arrested in connection with the theft of military items from a base in Lyttleton in December 2019.
Image: File

Two military officials and a department of education employee, who is out on bail for another crime, have been linked to the burglary at Lyttleton military base in which rifles were stolen in December 2019, the Hawks said on Friday.

Brigadier Hangwani Muluadzi said education department employee Kgotso Mooketsi, who had a pending charge of armed robbery, was arrested in Springs after he was found in possession of one of three empty magazines and an R4 rifle that was among the stolen items.

“The two suspects were arrested following a joint investigation by the military police and Gauteng branch of the Hawks National Priority Violent Crimes after 18 R4 rifles and three pistols went missing from SA Army Engineer Formation, Tek Base,” Mulaudzi said.

They have since appeared before a court of a senior military judge and were granted bail on April 22 2020.

“The joint investigation led to the arrest of Tyawana in Oudtshoorn, Western Cape, on February 3. Two days later, Mangale was arrested while on duty at SA Army Engineer Formation,” said Mulaudzi.

The 12 SANDF members who were arrested in connection with the theft of 19 R4 rifles have been released from custody and will appear in court again in ...
News
2 years ago

Since their arrest, the Hawks learnt that some of the stolen firearms were hidden and others were sold to different individuals, particularly in the East Rand area.

Mooketsi was possibly one of the buyers of the rifles.

“[He] was charged and appeared in the Springs magistrate's court in February and April respectively. He was remanded in custody pending his next court appearance May 4 2020,” said Mulaudzi.

Meanwhile, 13 of the R4 rifles and a pistol have since been recovered in Daveyton.

“Another firearm, a 9mm pistol, was recovered in a veld in Kwa-Thema. The recovered firearms were sent for ballistics testing in Pretoria,’ said Mulaudzi.

The two defence employees are expected back in court at Thaba-Tshwane on June 17 2020.

General Solly Shoke of the SA National Defence Forces welcomed the arrest of the soldiers, saying the military was not a place for criminals.

A KwaZulu-Natal man has been arrested for being in possession of five unlicensed firearms and 573 rounds of assorted ammunition.
News
2 years ago

Almost 1,500 firearms and thousands of rounds of ammunition have been handed over to police since the start of an amnesty for illegal and unwanted ...
News
2 years ago
Next Article