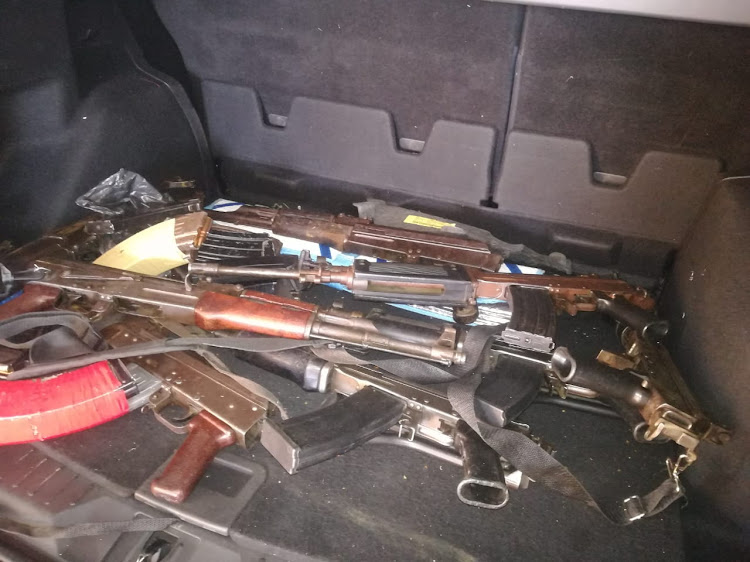 Some of the weapons confiscated by the police from a house in KwaThema, Ekurhuleni, on Monday.
Image: SAPS

Police arrested six suspects and also seized a number of rifles, including seven AK47s, and four stolen vehicles during a joint operation in KwaThema, in Ekurhuleni, on Monday.

Gauteng police spokesperson Capt Mavela Masondo said police acted on information of a stolen vehicle and pounced on a house in KwaThema on Monday.

There they found two white Mercedes-Benz vehicles and a Ford Kuga.

Masondo said the police then went on a manhunt for the suspects. "The search paid off when six suspects were arrested within the vicinity after they were found with two more pistols and a VW Polo."

He said preliminary investigations have indicated possible linkage of the suspects and their vehicles to robbery cases.

It was also discovered that the two Mercedes-Benz vehicles were reported stolen in Jeppestown in Johannesburg and Sunnyside in Pretoria.

"Further investigations will be conducted to establish other linkages of the suspects, the vehicles, as well as the firearms to previous violent crimes."

Cops on Tuesday pounced on four men who were allegedly breaking into the Australian direct bank UBank at Ekuthuleni Hostel in Carletonville, west of ...
News
2 years ago
Next Article