Police stop and search vehicles at the Baragwanath taxi rank during a patrol in Soweto on Thursday.
Image: Sebabatso Mosamo/Sunday Times

Informal traders hawking wares - without permits to operate during the lockdown - were deterred by soldiers in Soweto on Thursday morning, as an estimated 100 members of the defence force joined police on patrol in SA's biggest township.

Driving to Maponya Mall, where the soldiers assembled to finalise the logistics of the intensive lockdown patrol, street vendors could be seen preparing to set up their stalls.

Essential-service workers gathered in groups waiting for public transport as taxis hooted and a handful of people jogged.

On board the military mamba, soldiers chatted among themselves.

"We have families - we fear this corona too," one said. Judging from their conversations, they are frustrated by people who won't heed the call to stay at home.

The first stop was the Baragwanath taxi rank in Diepkloof, where scores of people could be seen roaming around. Some were turned back upon discovering that they did not have permits.

In less than an hour at the rank, at least 10 people were arrested.

One of them was a father of a 14-year-old boy who boarded a taxi to Braamfischer with goods for sale but did not have a permit to sell or travel. The tearful teenager was forced to take a taxi back home alone following his father's arrest. 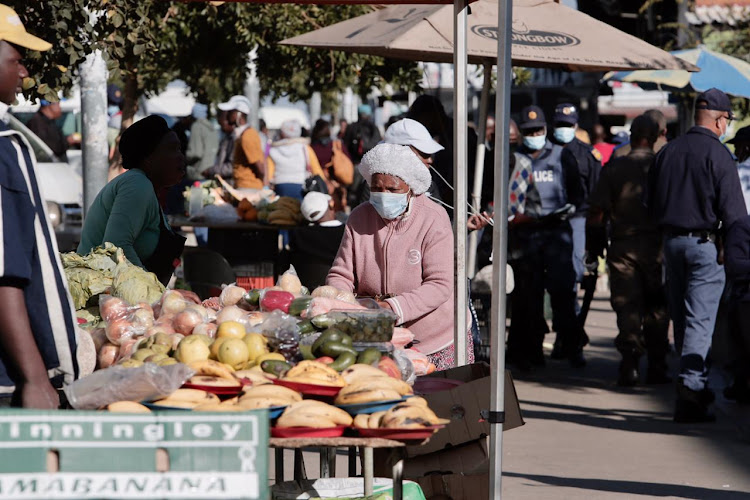 Street vendors and residents of Soweto continue with everyday life at the Baragwanath taxi rank on Thursday morning. Police and the SANDF patrolled the rank to check for permits and hand out pamphlets on Covid-19.
Image: Sebabatso Mosamo/Sunday Times

A man who carried a box containing packets of biscuits, usually sold for R1.50 in most townships, was also arrested. While officers questioned him, another officer decided to empty the box, and a stash of cash was discovered. Like many others, he had no permit.

In instances where elderly people or vendors with permission carried heavy goods, soldiers did not hesitate to lend a hand, while also handing out pamphlets with precautions to follow to avoid being infected.

"We have a legal and moral obligation to enforce regulations. We have chosen this area based on the complaints we have received from the ground, from the law-abiding citizens of this township, to say there are people who just conduct themselves as if nothing is happening," he said.

"Based on our observations, there is a high level of non-compliance and high-level ignorance. There are people who believe this thing is non-existent, it will never catch them. People just gather, just talk and do as they wish."

The operation was expected to later move to Freedom Park township.

Women between the ages of 31 and 40 are said to be the hardest hit by Covid-19 in SA.
News
2 years ago
Next Article