Informal traders queue to apply for trading permits in Johannesburg 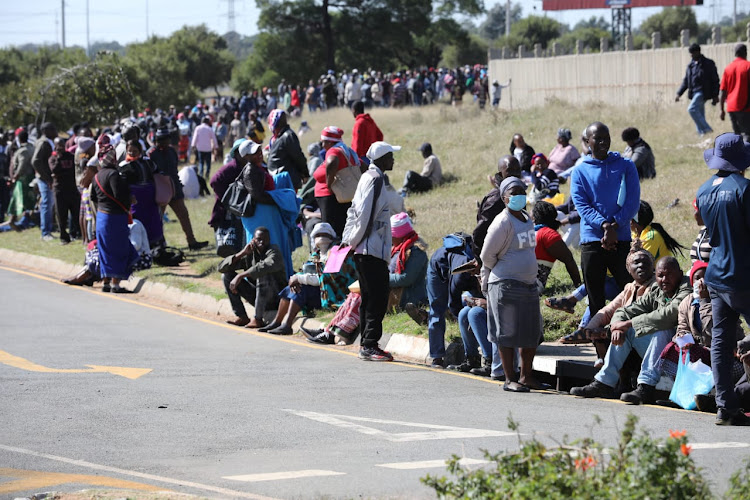 Informal traders had to brave the hot sun to get permits to run their businesses
Image: Antonio Muchave

Scores of informal traders formed a snake queue outside Soweto empowerment zone on Thursday morning to apply for trading permits.

Old women could be seen sitting in groups of three covering themselves with their jerseys to protect themselves from the sun. Some of them said they were given fake permits and others had to renew their permits as they had expired. Some of the permits seen by Sowetan were handwritten and others were just copies.

France Zunguza, 42, who sells fruit and vegetables at Dlamini township said he had been up at 3am so as to catch the first taxi.

"I arrived here at 4am and there were already hundreds of people waiting in the queue. I had problem with the law enforcers who told me that my permits were fake. When I went to apply for permit two weeks ago in Braamfontein, Johannesburg I was given copies. I have been told that I need to get original copies," he said.

Maria Malope, 42, who sells fruit and vegetables outside Jabulani mall said her permit had expired.

"My permit was valid till April 16 and now I am here to get another one. I don't want to find myself on the wrong side of the law because this is the only way for me to put food on the table for my children," she said.

Kedibone Mathe,42, said she had permit to go to the market and buy her stock.

"I have had problems with the police who said my permit was only valid to buy stock and not to sell. We have been here since dawn and I am worried I will go home without being helped. I can't afford to lose a day because we survive from hand to mouth, if I don't sell anything today how will I buy food for my children? I also have to raise enough money to be able to pay my rent," she said.

City of Johannesburg spokesperson Nthatisi Modingoane said the city had started with the second phase of issuing permits.

"Those who got their permits two weeks back are not supposed to be there as their permits are still valid. We are helping people who do not have permits and unfortunately we will have to call police for those who have fake permits," Modingoane said.

One person has been arrested in Protea Glen, Soweto,  for producing fraudulent permits for informal traders.
News
2 years ago

Informal traders hawking wares - without permits to operate during the Covid-19 lockdown - were deterred by soldiers in Soweto on Thursday morning, ...
News
2 years ago

A 44-year-old taxi owner allegedly behind arranging fake permits to allow  a number of taxis to travel   from the Western Cape to the Eastern Cape ...
News
2 years ago
Next Article