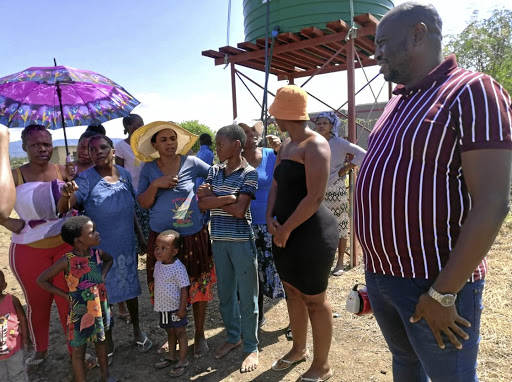 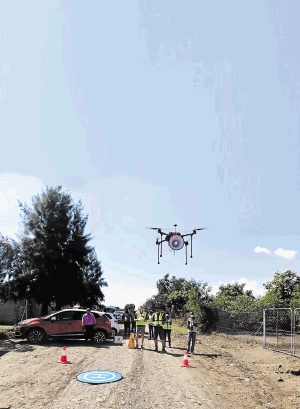 Three drones hovered in the air above a Limpopo village, loud-hailing the government's message encouraging people to wash their hands in an effort to contain the spread of Covid-19.

In response, a group of residents gathered at an empty tank yelled back: "No water."

For residents of JB Village in the Muhlava area under Greater Tzaneen municipality, water is a scarce resource.

While their municipality has enlisted drones to monitor compliance with lockdown rules and encourage hygiene to beat the scourge of Covid-19, residents yesterday took the opportunity to stand outside their homes to make their voices heard by demanding running water from municipal officials.

Resident Remember Shirinda told Sowetan that despite the municipality installing water tanks in the area last year, not a single drop has come out of the pipes.

"The only time we saw water coming out of this tank was when they were testing it with a power generator. Since then we haven't seen water from the connection, and when we enquire we are told it is not connected to electricity so we can't get water."

Shirinda said they were forced to break the regulations in search of clean water.

"We go out to buy litres of water from those who have boreholes in their backyards. It's tough for us because we pay R5 for 25 litres of water and before lockdown it was R1," he said.

Shirinda said it was impossible for them to wash their hands because basic water has become a luxury.

Another resident, Salvitia Mathebula, also demanded that the municipality prioritise the supply of water in the village.

"There is not even a water tank that supplies us with water. We hear what the mayor is saying on the drone but for us it is not doable without water," she said.

Municipality spokesperson Neville Ndlala said they were aware of water problems in the Muhlava area and residents were scheduled to benefit soon.

"We have assigned four water tanks for ward 18 which comprises of four villages and every Monday water will be delivered," he said.

Lack of water and sanitisers in Hhoyi village in Mpumalanga resulted in angry residents setting their dogs on health officials who had come to screen ...
News
2 years ago

Ndlala said they will take the matter up with the Mopani district municipality.

Two of the three drones are deployed in the area to capture pictures and video footage while the bigger-sized one is fitted with a loudspeaker to deliver the government's message to targeted communities.

The bigger drone has a recorded voice of the mayor Maripe Mangena speaking in North Sotho and Tsonga, encouraging residents to adhere to social distancing and go out only when necessary.

One drone captures a live video which is viewed from a monitor inside a car operating it and police officers are on standby to enforce the regulations where they spot transgressions.

A number of children playing in the streets were left in awe as the drones hovered above their heads.

Local induna Piet Shipalani said the message from the drones was very important during the coronavirus crisis.

"Everyone, including the children and old, can easily hear the message. But is up to us to make sure we follow what is said and stop doing the opposite," he said.

Ndlala said the drones have been effective in monitoring compliance of the lockdown rules.

"We have identified certain areas such as Bolobedu South, Maake and Dan as hotspots for noncompliance. A few days ago we managed to disperse a crowd which was hiding and drinking alcohol, we then directed the loudspeaker to where they were," he said.

Ndlala said the municipality had spent R62,000 for five days for the use of the drones.

The service provider Ntiyiso Aviation Services's managing director Jack Shilubani said the drones can fly higher than 200 metres. "But here we fly at 35 metres because there are no high trees and it can cover over a kilometre radius. We operate the drones ourselves because you need a licence to conduct it."

Unannounced visits to ensure compliance with Covid-19 safety measures at correctional facilities is part of the government's strategy to mitigate ...
News
2 years ago

When Strandfontein ward councillor Elton Jansen was told his community would carry the burden of housing thousands of homeless people on the ...
News
2 years ago
Next Article