'Economy bleeding R13bn a day due to lockdown' 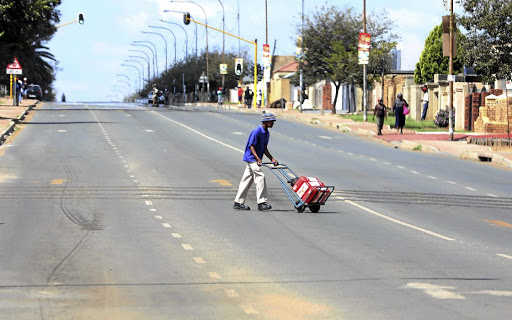 A man coming from the shop in Zola, Soweto.
Image: Veli Nhlapo

The country's struggling economy cannot be stretched any further and the government will have to consider gradual lifting of the lockdown.

This is according to economic expert at the University of Pretoria, Professor John Hall, who said SA was losing at least R13bn a day under the nationwide lockdown that has been in effect for over three weeks.

He was speaking a day after health minister Zweli Mkhize announced that their analysis showed the coronavirus was still spreading as people were not adhering to the calls to stay at home as he announced a new daily infections of 251, taking the total number to 3,034.

The rise in infections could lead to yet another extension.

Hall said that if extended, a hard lockdown would not make sense as it was negatively impacting South Africans and the economy and would make it even more difficult to recover.

"There must be a gradual relaxation of certain sectors in the economy of the lockdown. Certain sectors need to go back to work in order to start to earn an income and start generating some income for the economy," Hall said.

He said a consideration had to be made by the government to lift the lockdown on critical sectors, age groups as well as geographical locations where there were less infections.

Cyril would rather let millions starve than cut bloated cabinet

50% unemployed after lockdown are not numbers; they are real human beings with mouths and stomachs
Opinion
1 year ago

"I think the cost to the economy is too much. Our economy is kind of weak to generate the income that we are losing at this stage. We haven't got a big engine of an economy.

"I think that the president will start to relax certain movements, certain industries to go back to work just to get us going. He might even say certain ages of people [can go back to work]. The younger, economically active people must be allowed to go out if they need to go out to work.

"These are all the kind of plans which I think that a gradual relaxation will get the economy going and the money trickling into the households and the government's coffers and I think that is probably the way to go," Hall said.

Chairperson of the government's advisory committee on Covid-19, Professor Salim Abdool Karim, said the decision on when the lockdown will end depends on the spread of the virus slowing down.

Karim last week said that if the infection rate is over 90 a day by April 18 there would be a need for an extension of the national lockdown.

Black Business Council president Sandile Zungu has expressed concern over government’s inadequate facilities to support SMMEs which are likely to ...
Business
1 year ago
Next Article