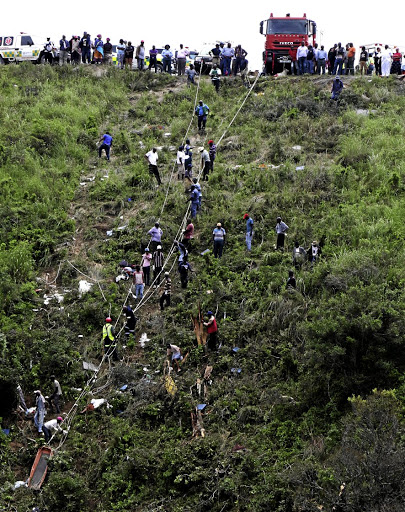 Rescue personnel at the scene of bus crash in Eastern Cape./LULAMILE FENI

The families of the victims of Monday's horror bus crash that claimed 29 lives and left 68 people injured near Centane, Eastern Cape, yesterday began the agonising process of identifying their loved ones at Butterworth Forensic Mortuary.

MEC for transport Weziwe Tikana-Gxothiwe said the postmortems were expected to start yesterday and that Africa Best (AB350) Bus Company had provided free transport to take family members from Cebhe village in Centane to Butterworth and back.

Transport minister Fikile Mbalula placed the death toll at 29, with around 60 people injured.

Mbalula said it was believed that the bus driver lost control of the vehicle, but further investigations into the cause of the crash were still being conducted.

He visited those who were still in hospital and also addressed concerned community members, promising harsher punishment for those operating unroadworthy public transport vehicles.

Survivors including Bukelwa Nkonki, 33, and Vulindlela Malambisa, 53, who miraculously escaped the crash almost unhurt, told Sowetan's sister publication DispatchLIVE that the bus was speeding and had been overloaded.

Transport minister Fikile Mbalula on Tuesday placed the death toll at 29, with around 60 people injured.
News
1 year ago

AB350 CEO Nosipho Ngewu said the bus, bought in December 2017, was certified to carry 65-seated passengers and 14 standing passengers. But according to figures provided by Tikana-Gxothiwe, there were 92 people in the bus before the accident.

In August 2015, 35 people were killed on the R408 between Butterworth and Willowvale, also in an AB350 65-seater bus, after it plunged into the dried-out Shixini River outside Nkelekethe village.

Tikana-Gxothiwe said: "We believe that overloading and speeding contributed to the accident, while we cannot rule out the possibility of mechanical fault. But all this will be ascertained by the investigation."

When asked about the state of the gravel road, the MEC said maintenance work had recently been completed on it.

amaXhosa Kingdom royal family spokesperson Xhanti Sigcawu said: "This is a third year in a row where we have been confronted with bus accidents... This is catastrophic for our community."

"We also wish to make a plea to the people of Centane and Gatyane [Willowvale] to rally around these families."