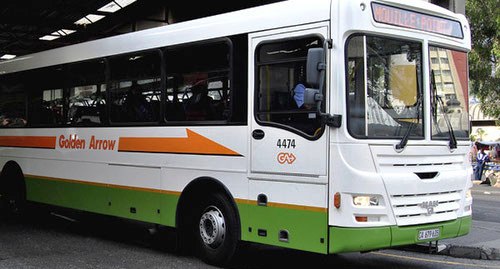 Cape Town traffic spokesperson Richard Coleman said, “Due to public violence in the Nyanga area, Golden Arrow buses are being stoned at the bus terminus."

“We’ve got two drivers who have been taken to hospital with slight injuries,” he said.

The barriers to mobility for residents of residents of the Cape Flats is truly unfathomable. Thousands
of commuters from Nyanga woke up to another transport crisis as taxis blocked Golden Arrow buses from operating in protest of impoundment of minibus taxis by traffic services. pic.twitter.com/JApyuwHRkF

Coleman did not elaborate on the cause of the violence but a series of tweets suggested that it may be linked to a taxi protest.

“Borcherds Quarry Road linked to the N2 is being utilised as a pick-up point for Golden Arrow,” said Coleman.

“SAP, metro police and the SANDF are attending to the violence.”

Poor bus users have to wall a distance to N2 to find their buses due taxi drivers strike now they are taking thier anger out to Golden Arrow's buses pic.twitter.com/lQj5N1S0kd

The charred body of a man found in the boot of a car on Sunday belonged to an SANDF soldier who was sent to Cape Town as part of Operation Lockdown.
News
2 years ago

About a month ago, the South African National Defence Force was deployed to various areas on the Cape Flats to assist police with their battle ...
News
2 years ago
Next Article