'We had to kill them,' says North West govt after two buffaloes found roaming the streets of Mahikeng 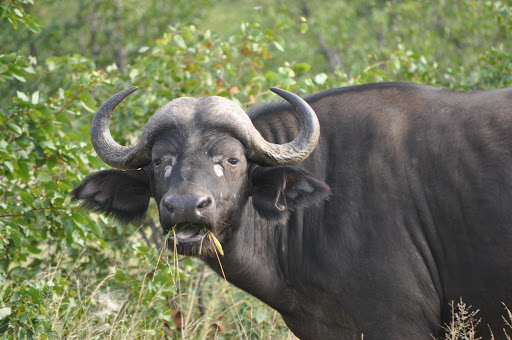 The Department of Agriculture and Rural Development in North West has defended its decision to kill two buffaloes which were spotted roaming the streets of Mahikeng on Wednesday
Image: Bruce Gorton

The North West government has defended its decision to kill two buffaloes which were spotted roaming the streets of Mahikeng on Wednesday.

The buffaloes, a male and a female, were spotted in a church yard opposite the North West University, an area used by hundreds of students.

Spokesperson for the agriculture and rural development department Dumisa Seshabela said they immediately dispatched problem animal control specialists and biodiversity conservation officers to the scene to deal with the situation.

“The department notes that this was not the ideal outcome, although given the condition of the animals and the situation at hand where human lives were potentially at risk, the duty to put them down was discharged swiftly,” said Seshabela.

A large crowd had gathered around the church to witness the incident, and this posed a further threat to the situation as buffaloes were very aggressive and had a tendency to attack humans beings, according to the department.

“The two buffalo became increasingly excited and displayed numerous instances of aggressiveness. Given the situation and the lives at risk, the department looked at various options however concluded that the animals had to be put down,” Seshabela said.

Director for biodiversity management, Jonathan Denga, said the decision had to be made immediately to protect humans.

“We were forced to act with speed given the situation at hand, the aggressiveness of the animals and the veterinary precautions, the decision was taken to put the two buffalo down,” said Denga.

How five lions escaped from the Kruger Park

How did the five lions which terrified some residents of Mpumalanga manage to escape from the Kruger National Park? Quite easily‚ it turns out. ...
News
5 years ago

He added that the decision was also prompted by the fact that the buffaloes were infectious and highly susceptible to foot and mouth disease — “and even without symptoms they nonetheless carry the virus and may be able to transmit it to others”.

The department's director for veterinary services, Dr Langa Madyibi, who was at the scene to analyse the situation, echoed similar sentiments.

“These animals had become increasingly excited and tranquillising them would have aggravated them even more, and there was a great possibility that they would attack,” said Madyibi.

He said the department had an option of drugging the animals but could not do that because “the tranquilliser would take a considerably longer time to gain effect, given their adrenaline levels”.

'This posed an even greater threat to onlookers and the department's environmental officials dealing with the situation,” he said.

It remains unclear where the buffaloes came from — but the department said it would conduct an extensive investigation on the origins and how they managed to be within a central area of town.

“Given the location of the animals, the department fears that they may have been transported illegally and either were let loose or escaped from the mode of transport.

“We cannot rule out criminal elements given the fact that these animals were found in the centre of a bustling town,” added Denga.

Investigations were ongoing and the department called on anyone with more information to contact the biodiversity management unit.