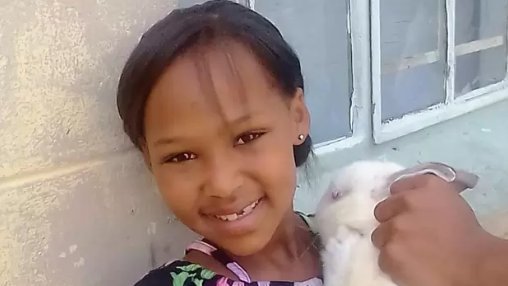 Tazne Van Wyk's body was found in a drain pipe late on Wednesday after she had been missing for close to two weeks. The suspect who has been arrested was out on parole after being found guilty of culpable homicide.
Image: change.org

The family of missing primary school pupil Tazne van Wyk, whose body was found in a storm water pipe in Worcester on Wednesday, believe her death could have been prevented.

There was an outpouring of grief and anger after news of the gruesome discovery broke early on Thursday in Cape Town.

The 54-year-old suspect who allegedly pointed out the crime scene after his arrest in Cradock in the Eastern Cape, had previously been released on parole.

“How many more children. Why don’t they bring back the death penalty ... It’s not right, he [the suspect] is now going to have a nice life [in prison]. Now we’re working for him, the one killing our children,” said the child’s aunt Samantha Viljoen in an interview with the SABC.

“Who is coming out [on parole] in December Mr President,” she asked tearfully.

[WATCH] #TaznevanWyk's aunty Samantha has hard questions for @PresidencyZA after the 8 year old's body was found outside Worcester. The suspect was out on parole (after serving time for similar crimes) when he allegedly snatched the child. @etvNewsSA pic.twitter.com/hvk3qk54wN

Van Wyk vanished without a trace near her home in Connaught Estate, Elsies River, nearly two weeks ago while going to a tuck shop. She was wearing a red and white top and red shorts.

SABC news reported that her mother, Carmen, collapsed upon hearing the news of her death.

“Your children can’t play outside. Is this how they must grow up? The children don’t understand what’s going on,” said Viljoen.

The angry community of Ravensmead has gathered outside the home of murdered 8-year-old Tazne Van Wyk.

A petition on change.org titled “Justice for Tazne Van Wyk” had garnered nearly 2,300 signatures just after 12:30pm on Thursday.

“SA Women Fight Back STRONGLY opposes BAIL for the accused in this matter and calls for harsher punishment for crimes such as these against our children and women in this country,” read the petition.

“We have had ENOUGH! We want to keep our children safe!”

Correctional Services spokesperson Singabakho Nxumalo told the Cape Times that the man had been sentenced to 10 years’ imprisonment for culpable homicide in 2008. He was released on parole in October 2016 and placed under correctional supervision.

"He was declared an absconder on February 6 2019, as he could not be located following various visits to his residence,” said Nxumalo.