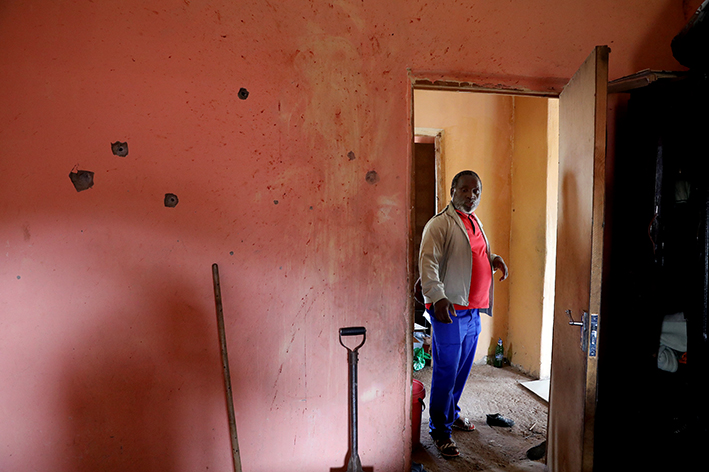 Zibonele Msomi in the room where his brother, Mvumo, was shot dead on December 11.
Image: Sandile Ndlovu

A police officer has been arrested in connection with the horrific murders of a family of six in Mpumalanga, outside Pietermaritzburg, in December.

The warrant officer, aged 51, was arrested in Johannesburg on Friday after police investigations.

“Detectives from our provincial organised crime unit, led by Brig Teboho Mbele, have been pursuing this investigation for the past two months and despite many challenges, they have been able to make a breakthrough. We will leave no stone unturned and ensure that the perpetrators face the full might of the law,” said KZN SAPS provincial commissioner Lt-Gen Khombinkosi Jula.

The man has been charged with murdering Mvumo Msomi, his children, Dumisani, Philisiwe and Celiwe, his nephew Dumisani, and their neighbour Bongani.

The Msomi family was hit by a hail of bullets after their house was surrounded by unknown people on the evening of December 11.

He also faces charges of attempted murder in relation to Msomi’s youngest child, Luyanda, 3, his wife, Zanele, and children Slindile, Sifiso and Senathi, who were in the house during the incident.

The man is expected to make his first appearance in the Mpumalanga magistrate’s court on Monday. He will appear alongside co-accused Buhlebakhe Khomo who was arrested on January 2.

Members of the Msomi family - whose loved ones where gunned down while watching TV in Mpumalanga, outside Pietermaritzburg, in December - are pleased ...
News
2 years ago

IN PICTURES | KZN family gunned down while watching TV

When a KwaZulu-Natal family gathered around their television to watch their favourite 8pm soapie, little did they know it would be their last time ...
News
2 years ago
Next Article