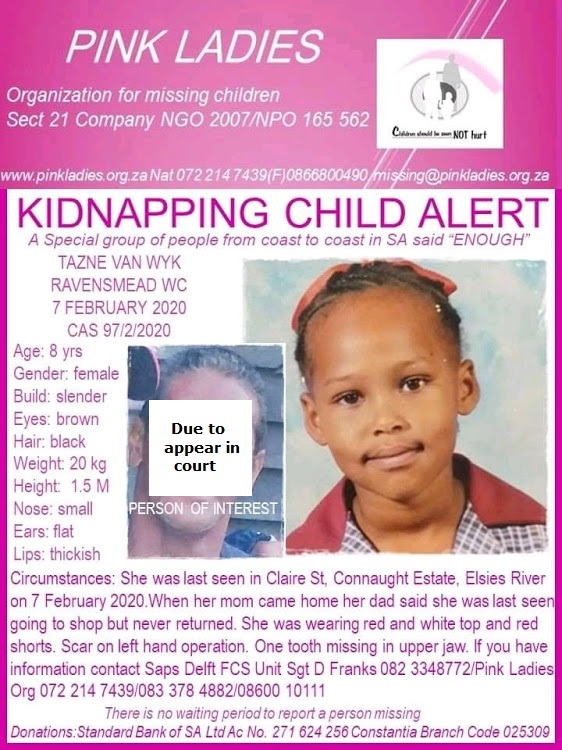 “The parents of Tazne have just been informed of the discovery and they are receiving counselling,” said Brig Novela Potelwa.

An investigation into the girl's disappearance led Western Cape detectives, with crime intelligence, to Cradock in the Eastern Cape, where they arrested a suspect.

The suspect, 54, was according to witness accounts the last person to be seen with the child. He was was believed to have been hiding in the town. He appeared briefly in court on Tuesday on a charge of kidnapping and was later transported to Cape Town.

“Further interviewing of the suspect by detectives led to the gruesome discovery of the body of the child in a storm water pipe outside Worcester” on Wednesday night, said Potelwa, “- as pointed out by him”.

The suspect will be charged with murder and is expected to appear in the Goodwood magistrate’s court on Friday.

“As the investigation unfolds, the possibility of the suspect facing additional charges cannot be ruled out,” Potelwa said.

She acknowledged that while the arrest would not bring back Tazne, the incarceration of the suspect would send a stern warning to would-be perpetrators.

“In a province that is notorious for crimes against women and children, we reiterate our resolve to ensure the perpetrators of these heinous acts are brought to book to face the full might of the law,” said  Matakata.

The provincial department of community safety is planning to keep a close eye on the case as it unfolds.

Provincial community safety minister Albert Fritz said on Thursday: “My department is in the process of activating the court watching-brief unit, which will monitor the case for any inefficiencies relating to the SAPS’ investigation, ensuring that the case is not struck off the court roll.

“A social worker will be deployed to debrief the family, following the news of Tazne’s death,” said Fritz.

A father allegedly killed his four children because he thought his wife was cheating on him.
News
1 year ago

The recent spate of children killed by their parents or relatives is part of an increase in the crime, says a criminal expert.
News
1 year ago
Next Article