Hunt on for father as four children's bodies are uncovered 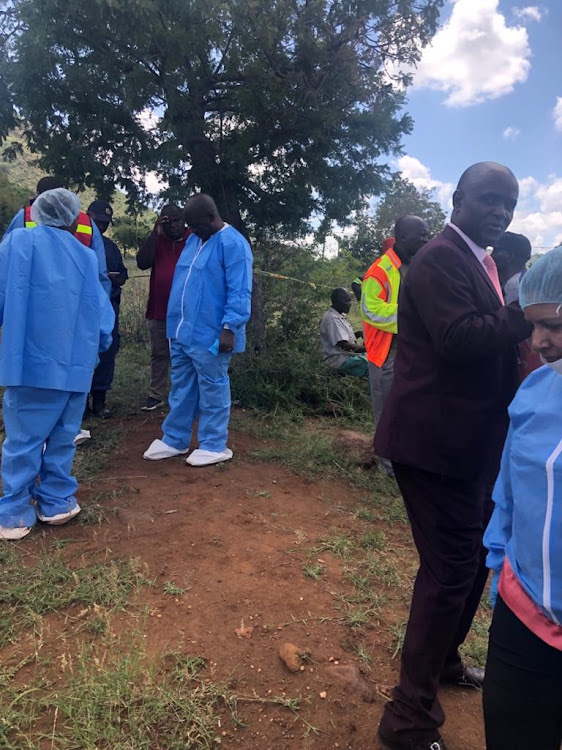 Police at the crime scene in Limpopo where the children's bodies were found.
Image: Supplied/SAPS

Limpopo police have ordered a manhunt for a 52-year-old man who allegedly killed his four children at ga-Phasha village on Monday.

Police spokesperson Brig Motlafela Mojapelo said the bodies of the children were found at two different locations in the area after the suspect allegedly confessed to the crime and revealed the whereabouts of the bodies.

“The suspect allegedly informed a neighbour this morning [Tuesday] about the murders and also indicated to him the places where the bodies were. The police were informed and, on arrival, the bodies of three children were found in nearby bushes, and the body of a three-year-old was found next to a local mountain, 3km away,” Mojapelo said in a statement.

Mojapelo said preliminary investigations had found the suspect stopped the vehicle transporting the children from school on Monday afternoon. The driver, who is said to know the man, stopped and allowed the children to leave with the father.

Three of the children were found with stab wounds and the youngest with open wounds, Mojapelo said in a statement.

Limpopo police commissioner Lt-Gen Nneke Ledwaba visited the scene and condemned the incident, saying it was committed by someone who was supposed to protect children.

Police said the motive for the killings was unknown. Four cases of murder were opened.

The mother of a two-month-old baby who was allegedly killed by her father says her daughter was "sacrificed for an evil ritual".
News
2 years ago

Charles Mncayi from Mayfield in Daveyton, on the East Rand, has been left distraught after his childhood friend allegedly bludgeoned Mncayi's ...
News
2 years ago
Next Article