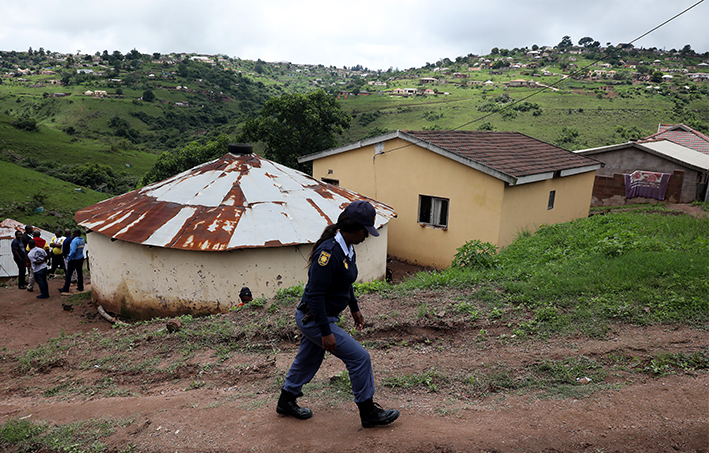 Six people were killed at the Msomi home after armed men attacked them in December. A police officers has appeared in court in connection with the murders.
Image: Sandile Ndlovu

A police officer who was arrested in connection with the deaths of six people in Mpumalanga, outside Pietermaritzburg, has been granted R5,000 bail.

Warrant officer Tholumuzi Ndimande appeared in the Mpumalanga magistrate's court on Monday. He is charged with six counts of murder, six counts of attempted murder and one count of robbery with aggravating circumstances.

He was arrested on Friday in Johannesburg in connection with the deaths of six people -  five from the Msomi family and a neighbour - who were gunned down while watching television in the Msomi home on December 11.

During his appearance, his lawyer, Zanobia Khan, applied for the matter to be heard in camera for safety reasons.

Khan told the court that four of Ndimande's family members had died as a result of the "history", and that Ndimande, who is originally from the area, had been transferred to another station as a result.

The application was dismissed by magistrate Sicelo Zuma, who said they there was no factual basis for the application. Members of the media were, however, barred from taking photographs of the policeman.

State prosecutor advocate Neville Loubser said that although the state was not opposed to bail, it was concerned if Ndimande would be able to travel to and from court from Johannesburg.

Ndimande was ordered to not be in the vicinity of the Mpumalanga area unless he is due to appear in court.

He will be back in court on February 28 where his matter will be combined with his co-accused, Buhlebakhe Khomo, who was arrested on January 2.

'Cult' members on trial for murder
News
2 years ago

Eighty-seven people have been taken in for questioning after the massacre of nine alleged illegal miners in Matholesville, Roodepoort, on Friday ...
News
2 years ago
Next Article