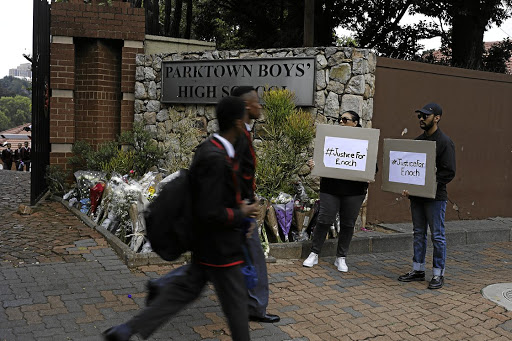 A small picket takes place outside Parktown Boys' High School. Classes resumed on Tuesday morning following a day of counselling on Monday for those affected by the death of pupil Enoch Mpianzi./ ALON SKUY

It appears pleas by Gauteng education MEC Panyaza Lesufi for Parktown Boys' High School to do away with the code of silence have fallen on deaf ears.

This has come to light as new details around the death of Enoch Mpianzi, a Grade 8 pupil at the school who drowned during a camp in North West last week, emerged.

A pupil who was at the camp where Enoch died during extramural activities in the river has told of how they were ignored by the facilitator and teachers when they reported that Enoch had been swept away just before they boarded the bus back to Johannesburg.

According to the pupil, "the headmaster addressed us and emphasised that we must not speak to anyone".

Two years ago, Lesufi called for an end to the code of silence after Grade 8 pupils at the school complained about being mistreated while attending the camps.

Lesufi declared in front of teachers and pupils that the code of silence will no longer exist and said anyone who is aggrieved has the right to complain.

A legal team led by advocates Tembeka Ngcukaitobi and Laurence Hodes has been made available to the family of the Parktown Boys' High schoolboy who ...
News
1 year ago

Part of his letter read: "To me this is a classic case of toxic masculinity. A boy disappears (and later dies) and all men in charge of the boys agree on a brotherhood of silence and a conspiracy of lies - if not by commission, certainly by omission.

"You asked the boys to participate in a conspiracy of lies, secrecy and deceit. Is this what you are bequeathing on our boys? Are these the leaders you are preparing for tomorrow?"

Today, Lesufi is expected to release a report with the latest developments regarding what transpired at the camp where Enoch lost his life.

Gauteng education spokesperson Steve Mabona said a law firm appointed by the department to conduct an independent probe has already commenced with the process.