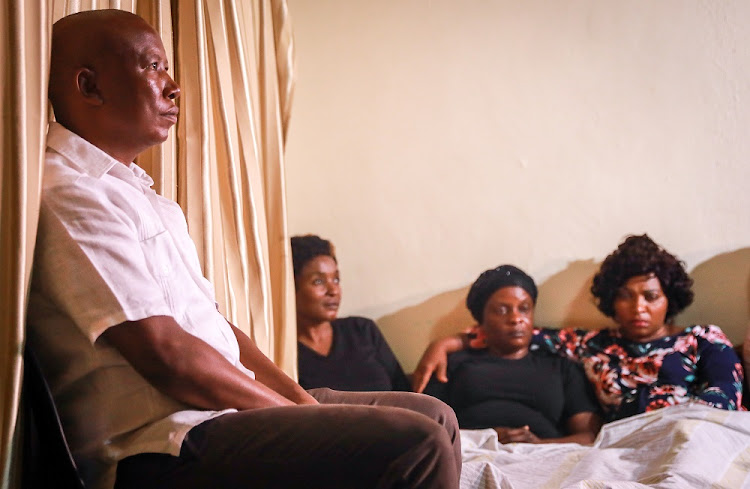 A legal team led by advocates Tembeka Ngcukaitobi and Laurence Hodes has been made available to the family of the Parktown Boys' High schoolboy who died at an orientation camp last week.

This was announced by EFF leader Julius Malema on Wednesday after visiting the family of Enoch Mpianzi at home in Malvern, Johannesburg.

Malema said the EFF had appointed the two advocates to seek justice for Mpianzi, 13, who is believed to have drowned during a rafting accident in the North West on the first day of the new school year.

He said he was shocked after learning of the circumstances leading to Mpianzi’s death. “We were all in the state of shock because when children go on a camp, we expect them to make friendships, develop a bond, so that when they come back to school to learn, they are not strangers to each other,” he said.

Malema said there were still many unanswered questions around Mpianzi’s death.

“As the EFF we have taken a decision to assemble a legal team, which is yours. It's not [the] human rights commission. No one can ask any question about it.

“The family has to have its own lawyers, which you can give instructions and there won’t be any form of restrictions ... You don’t have to pay anything for that - they volunteered themselves,” he told the family.

Both advocates have previously acted for the EFF in a legal capacity. Among their famous cases, Ngcukaitobi recently represented Fees Must Fall activist Kanya Cekeshe, while Hodes represented Glenn Agliotti, who walked free after standing trial for the murder of mining magnate Brett Kebble.

CIC @Julius_S_Malema let’s the family know that as the EFF, we have assembled a legal team, led by Advocate Tembeka Ngcukaitobi SC and Advocate Laurence Hodes SC, to provide legal services. pic.twitter.com/9O8O0GUhi9

Malema said he was touched by the recent tragedy, particularly as he is a father of three boys - one of whom had also gone on a school camp. “I was scared ... Our children were on their own,” he said.

He said all parents expected their children to return safely from a school trip. “Like all children, we had expected Enoch would come back.”

As the mourning family grapples with many unanswered questions, Malema assured them of the support of the nation. “We are here to support you ... We will find answers together,” he told them, vowing to raise the matter in parliament.

Lawyers of the lodge where Parktown Boys pupil Enoch Mpianzi drowned last week say they did not realise he was missing as they helped other boys to ...
News
1 year ago

The Human Rights Commission is expected to conduct a site inspection at Nyati Bush and Riverbreak, a camp site where Enoch Mpianzi lost his life.
News
1 year ago
Next Article