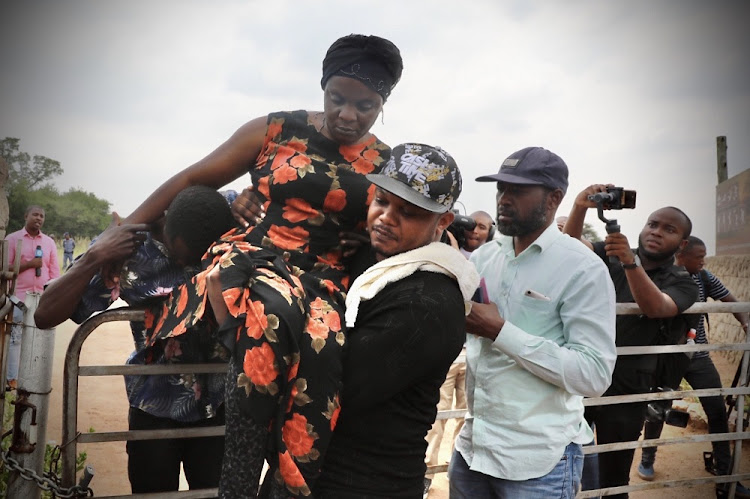 The parents of Enoch Mpianzi climb over the locked gates of Nyati Bush and Riverbreak lodge with a delegation from the SAHRC on Tuesday.
Image: Sunday Times/Sebabatso Mosamo

Nyati Bush and Riverbreak Lodge in Brits, North West, has, through its lawyer, denied that it refused access to the SA Human Rights Commission (SAHRC) on Tuesday.

Led by the commission's acting head of legal services, Buang Jones, the mother of Enoch Mpianzi, who died there last week, and a delegation arrived at the lodge to find the gates locked. They then resorted to jumping over the gate.

Daniël Eloff, from the Hurter Spies law firm, said the commission had not made an appointment at a convenient time.

“They sent an SMS in the morning saying they will make their way to the lodge. But my client was in Pretoria on consultation. They couldn’t be at the lodge.

“It’s simply not true that they denied them access. They were not around to open the gate,” Eloff said.

South African Human Rights Commission have accused Nyati Bush and Riverbreak Lodge outside Brits in North West of obstructing their job as the ...
News
2 years ago

He said the lodge’s doors were open to the public, even though “the business has been slow. And the staff members have been sent for counselling, as this has been traumatic.”

Mpianzi, a grade 8 Parktown Boys' High School pupil, died during a rafting accident while on an orientation camp. His body was recovered on Friday.

Jones reportedly said lodge representatives had agreed to the visit, before later referring him to their lawyers.

Anto Mpianzi, Enoch's mother, sobbed as she neared the scene of her son's death. The commission has stated its willingness to assist the family.

SowetanLIVE's sister publication TimesLIVE is awaiting a response from the SAHRC. The story will be updated.

"Oh my baby, why me Lord," Anto Mpianzi cried painfully as she walked towards where her son's body was found at Nyati Bush Lodge in Brits, North ...
News
2 years ago

'10 years ago there was a pupil who perished here,' says SAHRC at lodge where pupil drowned

Enoch Mpianzi was not the first young person to drown at the resort that hosted the recent school orientation camp that ended in tragedy.
News
2 years ago
Next Article