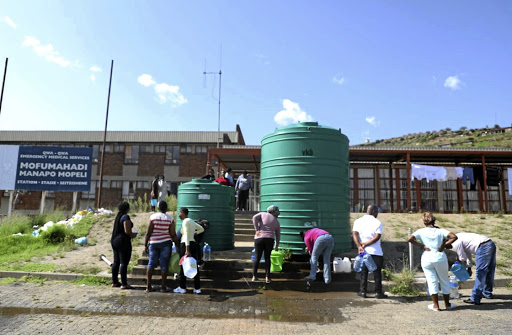 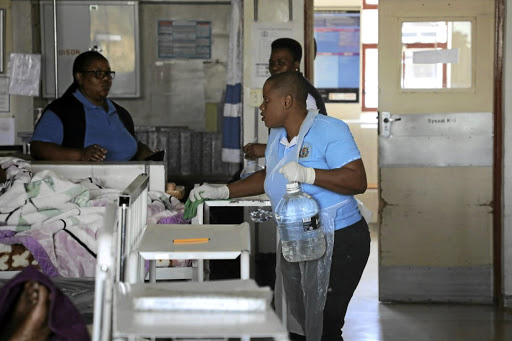 Health services have almost collapsed in QwaQwa in the Free State due to the water crisis in the area and protests that entered a second day yesterday.

Both Elizabeth Ross and Mofumahadi Manapo Mopeli hospitals in Phuthaditjhaba have been the hardest hit.

The water shortage in the Maluti-A-Phofung municipality, which includes QwaQwa and Harrismith, has sparked widespread protests in Phuthaditjhaba, where residents have shut down the area after seven-year-old Mosa Mbele drowned in a river on Saturday while fetching water. The shutdown has led to some nurses and doctors being unable to get to work. Service providers also could not access the health facilities.

Nonkululeko Matshoba, CEO at Elizabeth Ross District Hospital, said the facility has been plunged into a crisis.

"It is bad here. Roads leading to the hospital are blocked by protesters. We have limited services that we can provide to patients. We are a district hospital. Some of the patients have to be transferred to other hospitals but that cannot happen. We are sitting with patients that we cannot help. We are keeping them but we cannot help them," she said.

A failed state can be deadly

Her name was Mosa Mbele.
Opinion
1 year ago

Since Monday, all roads leading to the area have been blocked by protesters who are demanding clean water after months of struggling to get the basic service.

Matshoba said the hospital was operating with skeleton staff at the maternity and casualty wards.

What exacerbated the situation was that water tankers that deliver water to the hospital could not reach the facility yesterday.

"It has badly affected our cooking, cleaning and toilet facility," she said.

"Patients who have had infections had to be kept for longer at the hospital. It is a serious mess, we must admit," one doctor said.

Not all clinics can handle childbirth

The fact that this article appeared in the Sowetan for the second time shows how serious, disturbing and unacceptable this whole situation is.
Opinion
1 year ago

The doctor said nurses protested a while ago, complaining of deteriorating hygiene because of the water crisis that has gripped the area for several months now.

But hospital CEO Balekile Mzangwa said they had been coping until Monday when the protests began.

"We are using the jojo tanks ... for the ground floor, we've been able to utilise the borehole water on our facility."

Meanwhile, organisers of the protest vowed to continue with the shutdown.

"We had a meeting today [yesterday] and concluded that the protest must continue because we have not received any call from the municipality telling us about the solution. We feel that we've been disrespected by this municipality.

"The people are saying we should continue with the shutdown until they get water. The people are fed-up with these jojos because they are not enough for us," said Scotch Sikhosana.