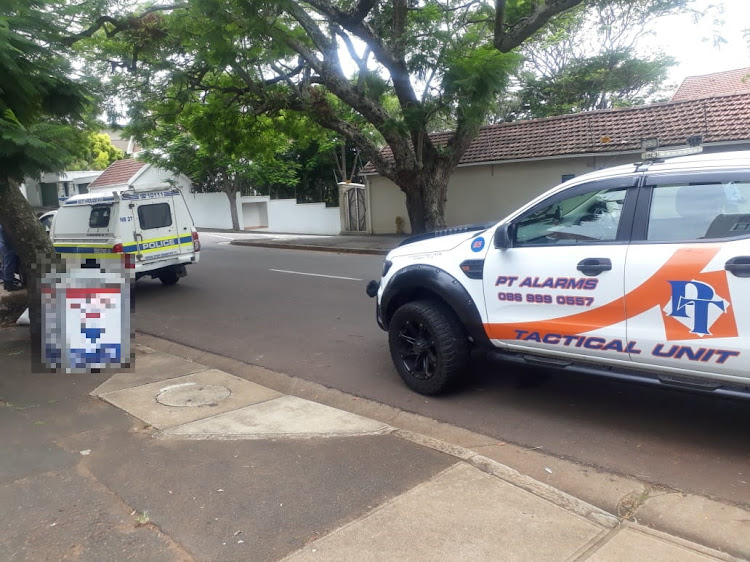 The scene on Currie Road in the Musgrave area of Durban where two contractors were robbed at gun point and locked in a garage on Wednesday.
Image: PT Alarms/Facebook

Two building contractors were robbed of their cellphones, tools and vehicle by two armed suspects who pretended to be searching for a missing woman and child in Durban on Wednesday.

In a statement, local security company PT Alarms said the incident took place on Currie Road in the Musgrave area.

“PT Alarms' Tactical Unit was on patrol in the area and were informed of the crime. The unit immediately went to the scene of the  non-client where it is alleged the two victims were locked inside a garage, giving the suspects ample time to flee.”

It is alleged that the two suspects approached the men on the pretext of looking for a missing woman and child and showed one of the men a picture.

“The two suspects then brandished a knife and firearm and escorted both men into the garage where they demanded their valuables and the car keys. The suspects drove off with the victims’ vehicle and locked them inside the garage, taking the garage remote as well.”

According to the statement, the victims managed to exit the garage through an inter-leading door and raised the alarm.

The unit and Berea police searched for the suspects but no arrests were made.

KZN teachers robbed of cellphones, cash on first day back at school

KwaZulu-Natal police are investigating a case of robbery after primary school teachers at a school in Newlands East were robbed on the first day of ...
News
1 year ago
Next Article