Over 300k students approved by NSFAS 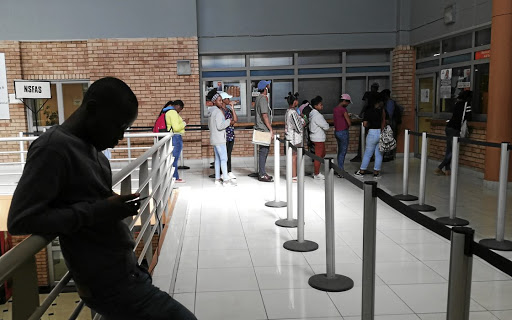 Students line up at a NSFAS office in Johannesburg.
Image: Thulani Mbele

There are more than 300,000 students who have been approved by National Student Financial Aid Scheme (NSFAS).

Minister of higher education and training Blade Nzimande said the NSFAS had received a record-breaking number of applications by the closing date of November 30 last year.

“More than 543,268 first time ever applications were received from applicants across the country. After a significant number had been processed, 359,037 applications were approved for the NSFAS funding. A total of 281,639 of all applicants received were SASSA beneficiaries,” Nzimande said.

Nzimande said NSFAS had launched a project in partnership with the department of basic education that aimed to provide supplementary NSFAS content to grade 9-12 pupils while they were still at school.

Student funder NSFAS sees a surge in applications for subsidies

The National Student Financial Aid Scheme (NSFAS) has received a sharp rise in first- time applications, with eight out of every 10 would-be students ...
News
2 years ago

He said following a high number of students being disqualified for funding in the previous year, NSFAS  administrator Dr Randall Carolissen introduced a new layer of quality assurance to review all applications before they are disqualified.

“A review process is done for all those students who are disqualified in the first round. A total of 30,632 are currently under assessment. At least more than 21,2000 returning university students have been declared eligible for NSFAS in the 2020 academic year. This is for the first time ever that NSFAS students are declared eligible before registration, thus eliminating hurdles for free registration by those accepted at institutions,” Nzimande said.