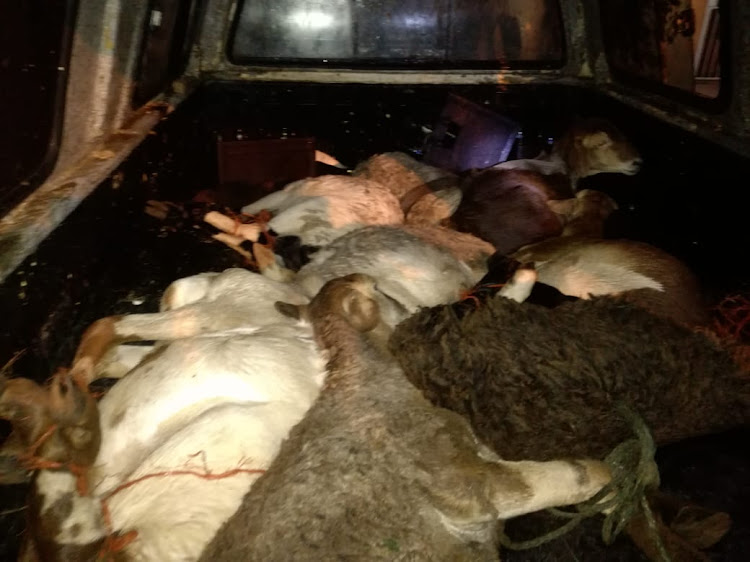 Nine sheep were discovered on the back of a bakkie in Ventersdorp on Sunday morning.
Image: SAPS

A 26-year-old suspect appeared in the Klerksdorp Magistrate’s Court in the North West for possession of suspected stolen goods on Monday after being caught with six sheep.

Vuyisile Mayegiso was nabbed at a small holding in Klerksdorp over the weekend after police followed up on information about the livestock. He was unable to give a satisfactory explanation as to how he got them.

Col Adéle Myburgh said the recovered livestock were part of a flock of 30 sheep that had allegedly been stolen from a farm on the N12 between Wolmaransstad and Klerksdorp in the early hours of Saturday morning.

Instead of running away from the law, 'stock thieves' in Parys, Free State, ran into the arms of the police
News
1 year ago

“The sheep were allegedly stolen from a kraal, then driven towards the N12, where they were loaded into a vehicle. Meanwhile, eight other sheep were found grazing about 4km from the kraal,” said Myburgh.

Mayegiso was released on R800 bail.

In a separate incident in the North West, police on patrol recovered nine sheep in the early hours of Sunday morning in Ventersdorp.

“That was after [they] stopped a bakkie in town for a search. During the search, nine sheep - which the suspects could not account for - were found," said Myburgh.

"Consequently the suspects, aged 51 and 29, were arrested for being in possession of suspected stolen goods.”

The pair are expected to appear in the Ventersdorp Magistrate's Court on Tuesday.

Instead of running away from the law‚ “stock thieves” in Parys‚ Free State‚ ran into the arms of the police.
News
1 year ago

More than 140 people were arrested in cross-border operations conducted simultaneously by 28 countries in southern and eastern Africa between ...
News
1 year ago

The R345-million Ncorha Bulk Water Project was launched in 2016, but will only be completed at the end of 2020.
News
1 year ago
Next Article