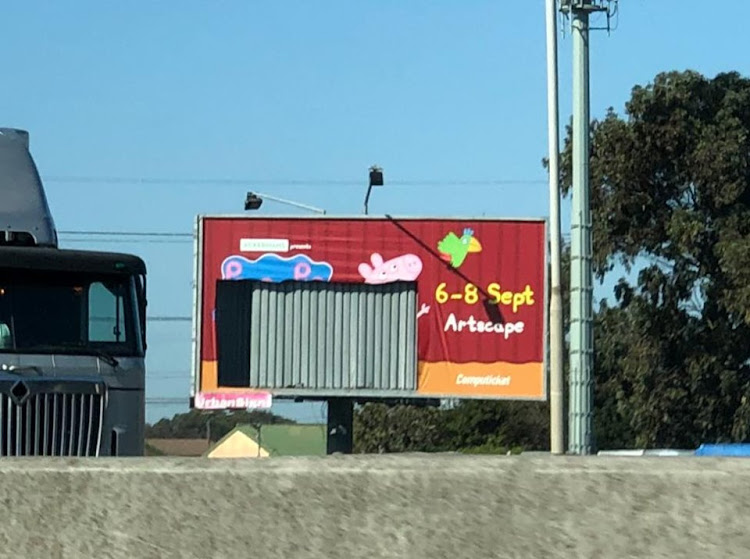 Peppa Pig really is a phenomenon. This stolen part of Peppa might be in someone's lounge.
Image: Facebook/Peppa Pig LIVE in SA

An over-eager fan may have made off with a large chunk of a Peppa Pig billboard in Cape Town, ahead of the cartoon character's much-anticipated live performance in September.

"It was a obviously a die-hard fan who was wanting an autograph from Peppa. They will probably bring the billboard with them to the show," said Peppa Pig Live resident creative director, Chad Findlay.

"If they return the billboard to Peppa, she will happily autograph a replacement poster for them, and it may be much easier to fit inside their lounge."

The billboard was taken from the N2 highway in Cape Town, heading towards the city's international airport, at the end of July, when tickets began selling fast. It was one of about 40 billboards across the country.

"They didn't take the entire billboard, they took half of Peppa's picture and Peppa's little brother, George. They cut it out beautifully and it's probably a large mural in some lucky kid's lounge," said Findlay.

"This is the only billboard that has gone missing. That's why we decided that this person must be our biggest die-hard fan. For everyone else, please go to Computicket and book your tickets instead of taking souvenir billboards down."

Peppa Pig's Big Day Out live shows start at the Artscape Opera House in Cape Town on September 6, and then move to The Globe at the Suncoast Casino in Durban on September 13.

Johannesburg will be the last leg, with shows starting from September 20 at Emperors Palace. Tickets for the 80-minute show range in price from R99 to R399.

In the interactive show, Polly Parrot and Mr Dinosaur vanish – leaving Peppa, George, Mummy and Daddy Pig embarking on a journey to find the missing duo. Peppa's special friends Suzy Sheep, Danny Dog and Pedro Pony are on hand to help in the hunt.

Guests get to dance, sing along and jump in muddy puddles.

"Peppa has millions of fans around the world, with some of the most loyal fans here in SA. It’s not even just young kids who love it, it's also mummies and daddies who watch and listen to the songs every morning, day and night," said Findlay.

"It's actually quite a phenomenon that a young little pig has such a top following."