Shoddy R8m roadworks to be redone 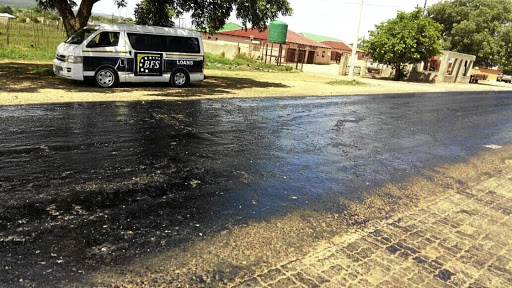 The poorly tarred road near Malelane in Mpumalanga./ MANDLA KHOZA

A company that was paid R8m for road upgrading work in Mpumalanga has been ordered to replace the tar after the community complained about the shoddy workmanship.

The provincial department of public works, roads and transport ordered Thulatsepo General Trading to rework the road after it apparently left "sticky tar" along the R570, which links Malelane on the N4 to Eswatini at the Jeppe's Reef border post.

Community members took to social media to complain about the shoddy roadworks.

"Please help us guys, we are approaching the festive season now, this road has had many accidents, and now being [the rainy season] it is slippery [and] it's going to be worse.

"Again, our cars get dirty... because the tar is muddy," said Suzman Gama.

Another community member, Themba Shongwe, said: "We were planning to protest, but we will wait for them [department of public works, roads and transport] but if they don't fix it, they are going to have a very busy Christmas because we are all back at home and we want our villages safe."

Department spokesperson Cyril Dlamini said they have called the company back on site because "there was no value for money" for the work it did.

"As the department, we have decided to order the company back on site to do the right job we hired them to do. From what they have done, we noticed they used a system used in colder areas which was not the real specification on this [project].

"They have promised us that by December 20, depending on the rain, they will be finished. But all the redoing of the road will be [at] no charge to the government as they [had] not done what we asked [and] paid for," said Dlamini.

Drunk driving a big concern.
News
2 years ago
Next Article