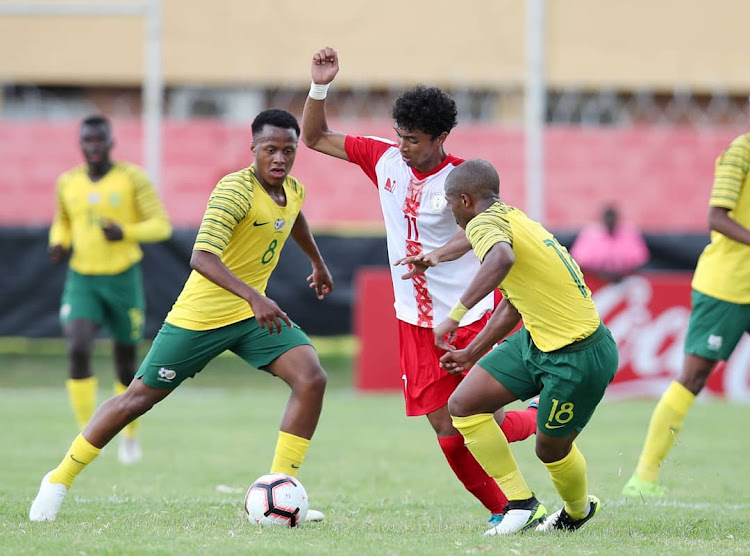 All four sides in the pool could potentially still qualify for the semifinals‚ with victories for South Africa and Madagascar in their final matches likely to see both go through as pool winner and best-placed runner-up.
Image: Safa.net

Coach Helman Mkhalele was pleased with the character and resilience of his side as South Africa came from behind to secure what could be a precious point in their 1-1 draw with Madagascar at the 2019 Cosafa Men’s Under-20 Championships in Lusaka.

South Africa head their pool on goal-difference from the Malagasy ahead of a meeting with Lesotho on Tuesday‚ where victory should seal a semi-final place.

A draw or defeat and it likely that the side‚ who have lifted the trophy in the last two years‚ will be heading home early.

Sinenjongo Mkiva netted his second goal of the tournament to give the team a point their play deserved‚ though it was the same old story for a South African side as they missed a host of chances to grab the win.

“We played against a tough team‚ they gave us a few challenges‚ especially with the physicality that they brought into the game and hard running‚” Mkhalele said.

“But I was happy with the performance of the boys‚ though not quite satisfied with the result.

"With the number of chances we created I felt we should have won the game. Their goalkeeper played very well.

“I was happy with the response from the boys coming from 1-0 down to be able to create that number of chances – that shows that they are growing in terms of their mental strength.

“The only thing we need to do is make sure we minimise mistakes‚ the goal that Madagascar scored is through our poor defending‚ which resulted in a free-kick that ended up in a goal.”

South Africa won their opener 5-0 but could not find a similar scoring touch against the Malagasy‚ which frustrated Mkhalele.

“We were more composed against Mauritius and more decisive in finishing‚ this time the players were hesitant in taking initiative.

"That split-second in hesitating to take initiative contributed to us missing chances.”

All four sides in the pool could potentially still qualify for the semifinals‚ with victories for South Africa and Madagascar in their final matches likely to see both go through as pool winner and best-placed runner-up.

“The group is wide open‚ even though we have the upper hand based on our goal-difference.

"It is important for us to make sure we up our game in relation to controlling the play‚ offensively and defensively‚” Mkhalele said.

“We must make use of every goal-scoring opportunity because it is a must win for us to increase our chances of progressing.”

He says the players do feel the weight of expectation with the side seeking a hat-trick of titles.

“From day one we have been under pressure and we have responded quite well. We showed resilience to come back against Madagascar.

"We don’t want to disappoint ourselves and we want to go out there and retain the trophy‚” the former Bafana Bafana winger said.

It used to be that a Bafana Bafana match would not go by without the masses pulling their chairs closer to the television to sit in a trance of some ...
Sport
2 years ago
Next Article