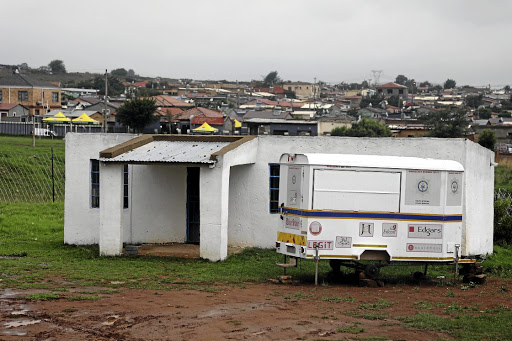 A safety kiosk has been deployed by the Gauteng department of community safety at the Bana-Bokamoso community centre in Vlakfontein. / Thulani Mbele

There is an eerie feeling that surrounds the Khoza household in Vlakfontein, in the south of Johannesburg.

The gates have been locked and the house is deserted since the gruesome discovery of seven family members who were murdered and buried in shallow graves, allegedly at the hands of Ernest Mabaso and Fita Khupe in October 2018.

They were both charged with the rape and murders of the seven.

Mabaso, 27, died after he allegedly hanged himself in the Cape Town police station's holding cell while Khupe, 61, had charges against him provisionally withdrawn following Mabaso's death.

While the community was recovering from the gruesome discovery, Mathapelo Mbele's remains were also found buried in a shallow grave of her boyfriend's shack in August after she had gone missing for several days.

Samuel Sibeko was charged with Mbele's murder and defeating the ends of justice and he is expected back in the Protea magistrate's court on January 8.

On this backdrop, community safety MEC Faith Mazibuko announced that her department would deploy a safety kiosk in the township in a bid to eradicate the scourge of femicide and gender-based violence.

The 41-year-old woman who was killed and found buried inside her boyfriend’s house in Vlakfontein has been identified.
News
2 years ago

Mazibuko said the kiosk would help bridge the distance between the community and the Lenasia South police station, some 8km away from Vlakfontein.

The safety kiosk has been operational in the community since August, but residents claim that it has not made an impact they imagined it would make.

Msizi Khumalo, a resident who lives across from where the kiosk is situated, said it opened twice a week.

"I think it's because people don't go there because they don't know why it's there. The crime in the area is still high. In August, when it first arrived, there were a lot of police officers who manned it but now you just find CPF [Community Policing Forum] guys who barely have anything to do," Khumalo said.

Mlungisi Mbense said he once used it to draft an affidavit.

"It is useful for minor things that require the law, but I don't know how it would help if there was a major incident in the area," he said.

For Mbele's family, it mattered little that a kiosk was deployed in the area as their daughter was murdered.

Mohau Mbele, Mathapelo's brother, told Sowetan that her death could have been prevented.

The 28-year-old man accused of killing and burying his 41-year-old lover in a shack they shared is expected to apply for bail on Tuesday.
News
3 years ago

"But to be fair, it's difficult to intervene between two people if you do not know what they are fighting for. The kiosk is a noble idea but it doesn't matter now. Hopefully, it can assist other families if they notice that their loved ones are missing, but what's the point if it is no longer there to assist those who need it? They can help them to report their issues earlier but it's too late of us," Mbele said.

He said he hoped that the various government campaigns aimed at eradicating the scourge of femicide, including the 16 Days of Activism for No Violence Against Women and Children, would stretch beyond it being an annual event.

Phineas Khoza, the relative of the slain Khoza family members, said it was important to have patrollers in the community who know what is happening on the ground.

"A kiosk, whether it's there or not, won't help bring to an end the murders if people can go missing for long periods of time without anyone knowing. But if there are patrollers who know the community inside and out, they will be able to know when something is wrong," he said.