Woman recalls how she lost her eye 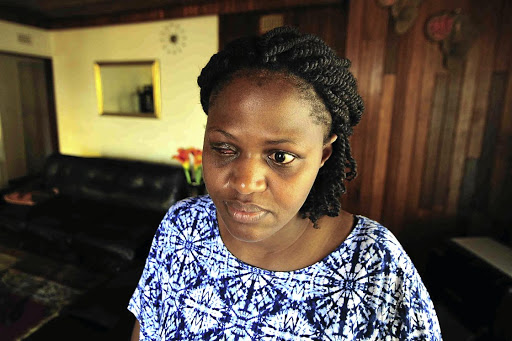 Sonto Radebe lost vision in one eye after she was allegedly stabbed by her ex-boyfriend. She now fears for her life because the man, who is on parole for murder, was released from custody. / THULANI MBELE
Image: THULANI MBELE

A woman has relived the violent attack that led to her losing her eye after she was stabbed multiple times by ex-boyfriend.

Sonto Radebe yesterday continued her testimony in the Roodepoort magistrate's court in the case against the ex-boyfriend.

Radebe has agreed to being identified.

Linda Makhanya faces two counts of attempted murder, rape and theft after he allegedly stabbed Radebe in two separate incidents. He allegedly raped her and stole her cellphone.

Makhanya pleaded not guilty to all the charges and told the court that the sexual intercourse between the pair was consensual.

An emotional Radebe told the court that she was stabbed by the accused on October 23 2017 over a month after he strangled and raped her in her rented room.

"I was getting ready for work at around 5am. I had just taken a bath and went to throw out the water I was bathing with into the toilet, which is situated outside. I went back into my room and to my surprise, I found my ex-boyfriend in the room," Radebe said.

The South African Society of Psychiatrists on Wednesday said women who experienced trauma as a result of rape and physical assault by their intimate ...
News
2 years ago

She said she did not know how he gained entry to her room or when he got in. Radebe said she was scared and back tracked after seeing Makhanya walking out of her room.

"That's when he started stabbing me with a sharp object. I didn't see what the object was," Radebe said. "He stabbed me six times on the left arm, two times in the right arm, on the shoulders and in my right eye socket," she said.

She told the court that she lost her eye and has had a prosthetic eye implanted in the socket.

She said that even though their break up was mutual, she felt that she had endured enough abuse because her ex-boyfriend often assaulted her. Radebe also told the court she did not know how he learned about her whereabouts.

"When we broke up, I did not tell him where I was moving to. I was living with him at his parents' home and decided to move out after we broke up because he was abusing me," Radebe said.

"But after moving out, I realised that I had forgotten my TV remote and a few other items, so I needed to go collect them. I didn't realise that the accused was following the vehicle I was using to move those items to my place of residence."

Radebe previously told the court that her ex-boyfriend choked her until she lost consciousness before raping her in her home.

The matter was rolled over until January when further testimony is expected to be heard.