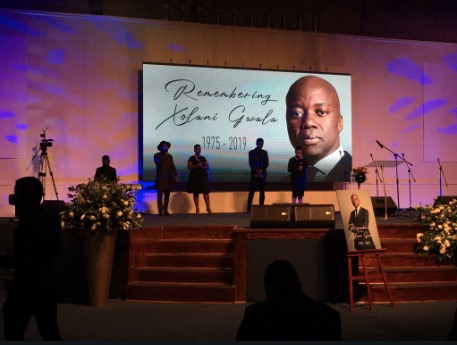 Xolani Gwala is being honoured at a memorial service in Randburg.
Image: TshisaLIVE

An emotionally charged memorial service in honour of Xolani Gwala is under way at Grace House Family Church in Randburg, Johannesburg.

Gwala died on November 1 after a lengthy battle with colon cancer. There's been an outpouring of tributes for the broadcaster, who has been remembered as “fearless, compassionate and a fierce proponent of democracy”.

Emotions ran high when Gwala's close friend and sports personality Robert Marawa took to the podium to remember him.

“The humility of the man is something I will never forget.”

Marawa also shared a sombre story of how, two days before Gwala's death and even though he was struggling, he moved his arm as if he was waving.

“Two days before he passed away, we could see a man that was struggling. I remember telling his wife that I have a song that will trigger something. We played Fighting Temptation and guess what, in the little he could do, he moved his left hand as though he was almost waving. Everyone was shocked in the room.

“I will miss a dear friend, someone I had long chats with. I didn’t think it was going to end this way. Farewell my dear brother.”

Thursday's service is one of several to honour Gwala. He will be buried in his home town, Impendle in KZN, after a funeral service on Saturday.

Friends, family and the famous paid tribute to respected journalist Xolani Gwala at a memorial in Rivonia, Johannesburg, on Wednesday November 6 2019. Gwala passed away on November 1 2019 after a long battle with colon cancer.

Hundreds of people gathered at Our Lady of Lourdes Catholic Church in Rivonia, Johannesburg, to pay their respects to departed radio journalist ...
News
2 years ago

We lost the Gwala star far too soon

It is with deep sadness that I note the demise of Xolani Gwala, one of our finest radio journalists.
Opinion
2 years ago
Next Article