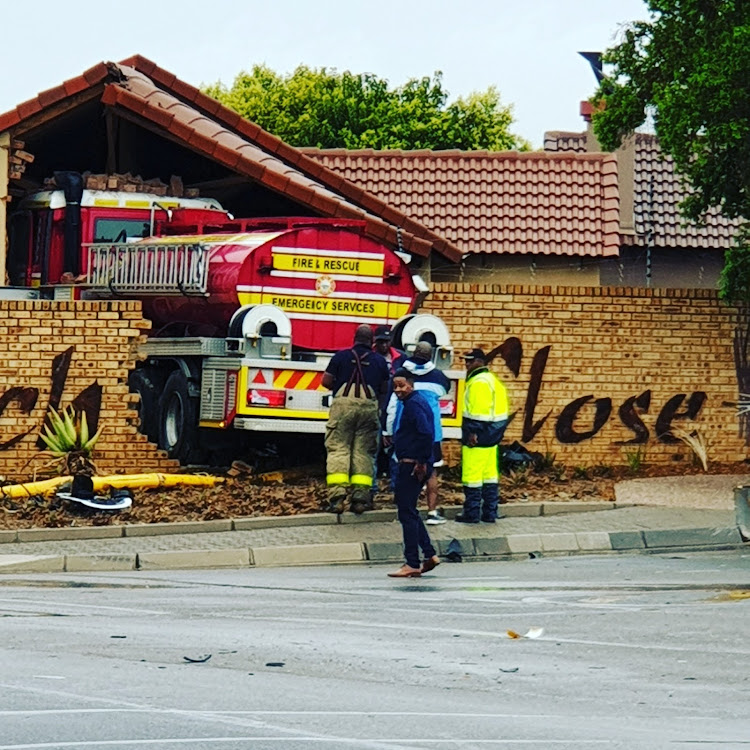 A driver lost control of the Tshwane emergency services fire engine and crashed into the wall and home of this Centurion home in the early hours of Saturday morning.
Image: Twitter/Ntando Kubheka

Heavy rains in Tshwane have kept emergency personnel busy and led to a fire department tanker crashing into a house in Centurion early on Saturday morning – leaving two people injured.

In a separate incident, emergency services personnel rescued a motorist in Tshwane when his vehicle got stuck in a flooded street after heavy rains in Centurion on Saturday morning.

Tshwane emergency services spokesperson Charles Mabaso said staff were responding to an emergency call in the early hours of Saturday when the tanker crashed.

“It was raining and the driver lost control of the vehicle and crashed into the wall and the house.

“Fortunately, the occupants of the house were not injured as the crash affected the garage side of the house,” Mabaso said.

In the flooding incident, Mabaso said emergency services assisted a person who was trapped inside their vehicle.

He said the whole of Centurion where the Hennops River flowed was prone to flooding.

Ten people were injured when two vehicles collided on the M41 opposite Cornubia Mall north of Durban on Sunday morning.
News
2 years ago
Next Article