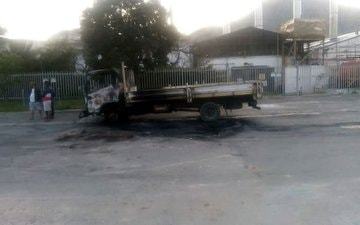 A truck was torched at a power depot in Hangberg, Hout Bay, on Monday night after protesters blocked off roads.
Image: Twitter/@RiotandAttackSA

A truck was torched and police are on high alert in Cape Town after a public meeting in Hangberg, Hout Bay, where a service-delivery discussion became heated on Monday night.

"Kindly be advised that a case of public violence has been opened for investigation. According to reports, Hout Bay police can confirm that yesterday about 7pm a public meeting was conducted in Hangberg regarding service delivery issues," she said.

"A group of 50 people gathered after the meeting and the road was barricaded with building material, rocks and other objects to prevent any vehicles from entering the harbour.

"Public order police service monitored the situation. Circumstances surrounding this incident are being investigated with no arrests made so far," she said. 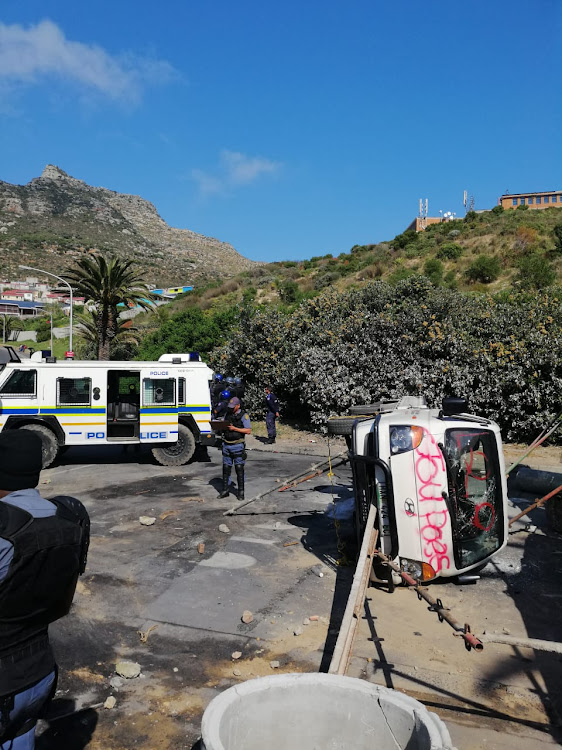 Vehicles were overturned and building materials burned as protesters closed off Harbour Road in Hout Bay on Tuesday.
Image: City of Cape Town

The protests flared up again early on Tuesday.

"Today about 50 people blocked the entrance to Hangberg. The area is being monitored by police."

He said authorities were on scene to manage the situation.

"Harbour Road, Hout Bay, has been closed. Protesters are making fires in the road again. Contractors' scaffolding is being used to fuel the fire. All agencies are converging to manage the situation," he said.

MyCiTi bus services were disrupted and authorities warned residents to avoid the area.

Dyason said a councillor would address the protesters about their concerns.