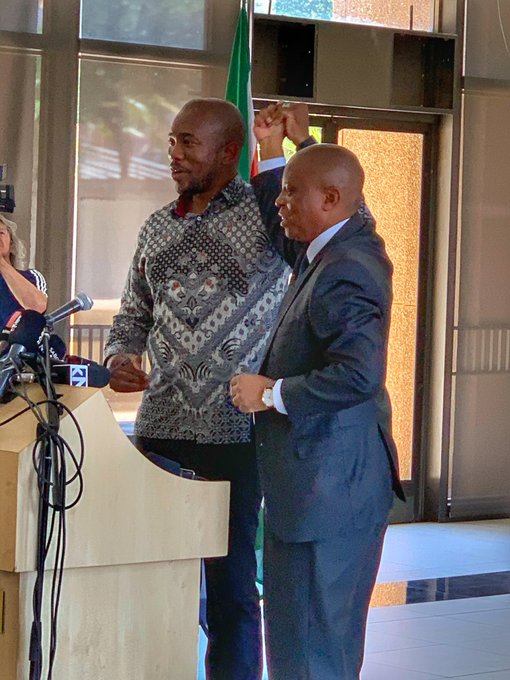 DA party leader Mmusi Maimane attended Herman Mashaba's press conference to announce his resignation from the party and from the mayorship of the city of Johannesburg.
Image: Andre Coetzee via Twitter

The writing is on the wall for the DA-heavy coalition government in Johannesburg after mayor Herman Mashaba’s resignation on Monday.

The DA, which governs the metropolitan municipality with the help of smaller parties through a coalition, has come under fire since Mashaba announced his resignation, with some parties threatening to pull out of the partnership.

In a short statement by Cope spokesman Dennis Bloem on Monday, he said the party will re-evaluate its relationship with the DA.

“It is very unfortunate and also disturbing to listen to the reasons that led to Mashaba's resignation … Listening to Mashaba is a tell-tale that some in the DA are resisting change and continue holding on to right-wing tendencies,” said Bloem.

“As part of the coalition with the DA in the Johannesburg metro, Cope will have to discuss the status of our coalition in our next congress national committee (CNC) sitting. We are also going to request a meeting of the coalition so that we can get information and map a way forward for the coalition.

“This is about resistance by liberal forces that want to continue denying the historical injustices. We shall re-evaluate our participation in the metro coalition.”

SowetanLIVE earlier reported that Mashaba’s decision was sparked by Sunday’s election of Helen Zille as the DA’s federal council chairperson, a position second only to that of party leader Mmusi Maimane.

In his announcement, Mashaba accused the party of veering of Maimane’s vision of “one South Africa for all” and that the party had set out to frustrate him for being “pro-poor”.

Another coalition partner, the IFP, said in a statement on Monday that Mashaba’s decision stemmed from circumstances “largely anchored in DA politics”.

The party’s Gauteng chairman, Bonginkosi Dhlamini, said it would study Mashaba’s statements relating to the governance of the city and “make a pronouncement in due course”.

"The co-operation government has not been without its challenges, but importantly more often than not we have been able to agree on the best possible solutions for the people we serve. The disagreements have strengthened our co-operation,” said Dhlamini.

“During this transition period in the city, the IFP remains committed to putting the people of Johannesburg first, and therefore in the days leading to November 27 [when Mashaba’s resignation takes effect], service delivery must not be interrupted.”

The EFF – which despite not officially being part of the coalition had steadfastly supported Mashaba and voted alongside the DA – described Mashaba as “always humble, consultative and willing to concede to superior logic”.

“Even as he belonged to a political party characterised by white supremacy and anti-poor policies, Mashaba turned his back on these policies and practices that are core to the DA. He became more social democratic than even the neo-liberal ANC that his coalition government replaced. He ran the city with the poor and not profit at the centre of policy planning,” the party said in a statement.

“There is absolutely no doubt that the election of Zille as federal chairperson is a turn to the right in the DA, which should necessitate all social democrats to abandon it once and for all. Zille represents a colour-blind white caucus that seeks to live life as if there is no racism and the brutal history of apartheid in SA.”

It said Mashaba’s departure is a “sad development for the left-leaning and people-oriented transformation of the local state”.

“The EFF will now enter into internal consultations and at a right moment, we shall inform the people of SA and the city of Johannesburg of our proposed way forward.”